The Tent in Mandaue targets slice of Cebu’s events market 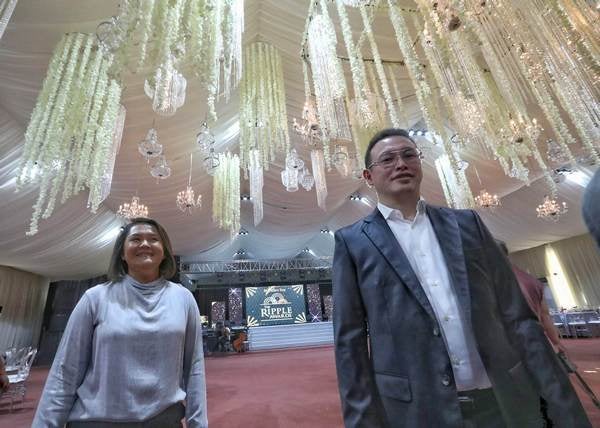 Taking advantage of their prime location in the North Reclamation Area of Mandaue City, developers of the Mandani Bay project has opened its newest events area dubbed as The Tent.

According to Leorelei Ylaya, marketing head of Mandani Bay, The Tent can accommodate from 800 to 1,200 guests for different occasions including weddings, birthdays, and corporate events among many others.
“We wanted to respond to the need for the market to have an event area in the center of the city. The event areas now are located in Banilad and the Mactan area. So we wanted to leverage on our central location and came up with this events tent,” Ylaya said during a preview of The Tent last Thursday.

The Tent can also accommodate smaller activities as it can be divided into smaller areas.

She also said they wanted to give clients a choice of a wedding reception venue, especially since the Tent also have a garden that could be an extension for events like weddings.

Its location, which is near a church, is also an added advantage.

Ylaya said that they had already held a big wedding event, a Miss Saigon play and corporate Christmas parties at the Tent last year.

Although only an interim facility and will be dismantled when the whole P130-billion Mandani Bay project is completed, The Tent is 1,250 square meters big, nine meters high, and fully air-conditioned.

According to Gilbert Ang, project director of HTLand, the property developer behind Mandani Bay, The Tent is just one of several temporary structures and amenities they will be erecting within the 20-hectare property while waiting for its full completion.

“Aside from The Tent, there will also be the boardwalk and the first tower to be completed. We target it to be turned over by first quarter of 2020. By then there will be residents here already,” he said during a briefing of the project.

HTLand is a joint venture between the Gaisano-led Taft Properties and Hong Kong Land.

When fully completed, the entire 20-hectare property of Mandani Bay will have a total of 21 towers, each with 25 to 50 floors.

Ang said they envision Mandani Bay to be the new central business district of Mandaue City.

“In fact, this is why we say we are transforming Cebu because this area before was nothing but container yards where nobody wants to drive through because the roads are not so nice and the streets are not well lighted,” he said.

Right now, construction of Towers 1 and 2 is ongoing. All 870 units in the two towers have been sold out.

On the other hand, Tower 3 is already 80 percent sold while in the second quarter of this year, Ang said they will be launching Tower 4.

“As early as now, we want the people of Cebu to experience what they will experience in Mandani Bay once it is fully developed,” he said.

The property will have a 500 meter boardwalk which will be leveled and facing the Mactan Channel.

Mandaue Chamber of Commerce and Industry (MCCI) President Stanley Go welcomed the addition of another option for events within the city.

He said developments like Mandani Bay and its The Tent, as well as other properties within Mandaue City like malls and commercial complexes held boost the city’s positioning as a gateway city.

“Before, when you have meetings and visitors from Manila or outside the country, you have to drive all the way to SM or Ayala to have dinner or meetings. Now, you don’t have to travel far and go through all the traffic. You can do this within Mandaue City,” he said.