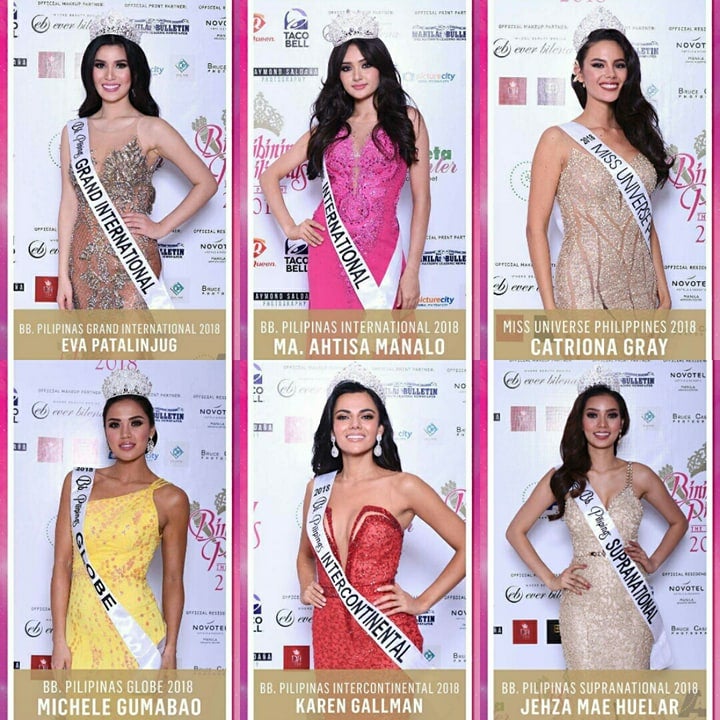 THESE beauty queens believe that they would not have gotten their crowns if not for the people who have been supporting them.

Fresh from their victory at the pageant held at the Smart Araneta Coliseum last Sunday, the newly crofwned Binibining Pilipinas 2018 winners took to their social media accounts to thank everyone behind their success.

Binibining Pilipinas Universe 2018 Catriona Gray said on her Instagram post, “How do I begin to thank all the beautiful souls who have been so generous and kind with their time, effort, and resources?

Truly, I would not have been able to realize this dream without you all.”

Gray is set to represent the country in this year’s Miss Universe pageant.

This is her second time to wear the sash for Philippines. She made it to the top five in Miss World 2016.

“Just to think that I’m going to be able to say Catriona Gray …. PHILIPPINES gives me the chills all over again,” part of her post said.

“You are like a diamond. You don’t crack under immense pressure because it’s what created you. I LOVE YOU MISS UNIVERSE PHILIPPINES 2018,” Bondad said.

She also admitted that she wanted the crown for the Binibining Pilipinas 2018 title but she believes that Gray “has been on fire throughout the competition.”

“Elegant and beauty with fierce energy you have been crowned Miss World (Philippines) and now Universe (Philippines) for a reason. The international stage is yours and I have no doubt you will bring it home for all of us,” Gallman said.

Binibining Pilipinas Globe 2018 Michele Gumabao, for her part, honored women who doubt themselves.

“This crown is for every girl who was told she couldn’t! Believe in yourself, impossible is just a word,” Gumabao said in her post.
Before she became a beauty queen, Gumabao was a member of volleyball varsity team of De La Salle Univeristy.

She thanked her family, friends, and supporters who have been with her in her Binibining Pilipinas journey.

“Thank you God for always giving me the means to pursue my wildest dreams and craziest imaginations,” Gumabao said.

Binibining Pilipinas Supranational 2018 Jehza Huelar said she is now ready to embark herself on a new journey.

”I can’t wait myself to say, Jehza Huelar, Philippines!” she said in her post.

Huelar said she also believes that God gave her the perfect timing for everything.

“Thank you Lord God for all your blessings to me and to my family, for the strength you’re giving me each day and for all the people around me who are making my life more meaningful,” the beauty queen from Davao City said.

Both shared on their Instagram Stories about their guesting in “Umaga Kay Ganda,” a morning show on ABS-CBN and ANC’s Early Edition on ABS-CBN News Channel.