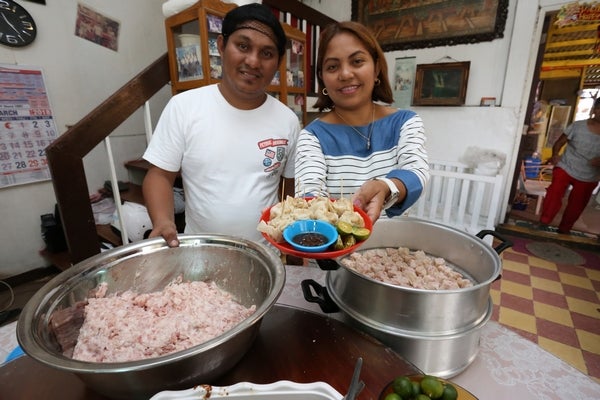 Jose Julian Nadera and his sister, Marrell, has put a twist in their siomai business that have set them apart from other siomai businesses in Tisa with their unli-siomai offering.

In a barangay like Tisa in Cebu City that is known for makingsiomai, how does an entrepreneur, who makes the same product, sets himself apart from the others?

For P100, a person can have all the siomai, pusô (hanging rice) and iced tea that he or she can consume.

This is a deviation from the business strategy of other siomai retailers in the village with stores located on the side of the street where one piece is sold at P6.

“It was a concept that I thought about in the hopes of having a business that can sustain the needs of my family. I did not expect the public’s response to be this warm,” he shared.

Running an unli-siomai business means that people actually sit down and eat whatever they want for a longer period than the usual time they spend in other stores.

This is why along with his older sister, Marell, Agok decided to open the first home-based siomai eatery in the area.

Their first location was the house of Marell in Sitio Upper Manol. Later, their mother’s home also accepted hungry patrons.

With the two houses serving as “stations”, they were able to serve about 40 people at the same time.

Marell, with her skills in sales and marketing, used Facebook to advertise the business.

She posted the details of the unli-siomai business on March 2, two days before their official opening.

On the morning of March 4, the unli-siomai post was shared on Facebook by Sugbo.ph, an online site which promotes different tourist sites in Cebu.

Before they even opened at 2 p.m. that day, a stream of people started to arrive in the area eager to eat in Cebu’s first “Unli-siomai sa Balay.”

More people poured in the next three days that left the family to think about expanding the area.

“But there was simply no space to expand. The power of Facebook has positively affected our business and we saw more people coming to our eatery,” said Marell.

While they were thinking for another space to transfer to, they remember the ancestral house of Agok’s in-laws in the nearby Sta. Teresita Village.

The house of the family of his wife, Cristy Bacalla Nadera, has a bigger area in the living room and the garage can be converted into a dining station.

Steaming and other food preparation can be done in the house’s kitchen.

“Everything fell into place. We moved so fast in preparing the house so we can cater to more customers,” said Marell.

By March 8, they moved to the present location which can sit about 80 people, or double the number of people they used to accommodate from the previous site.

The eatery is open at 2 p.m. and closes at midnight although people would request for earlier time schedules to visit the eatery and enjoy their siomai.

During each production day, they utilize 100 kilos of pork meat which can make around 6,000 pieces of siomai.

Agok said the 6,000 pieces is good for two days for the unli-siomai business and orders from retailers from Camotes, Balamban, Bogo and Cebu City.

They also deliver siomai as far as Zamboanga.

An Information Technology undergraduate, Agok is not new to the world of business.

Raised in a family of entrepreneurs who loves cooking, their mother, Aurelia, was in the business of selling jewelry. The family used to run an eatery business too.

Although he knows how to make siomai and later supplied retailers in the village, Agok refrained from selling the product himself out of respect to one customer, who has a siomai eatery.

Knowing his brother’s capacity, Marell said they have been bugging Agok to establish their own siomai eatery.

When his business relationship ended with that customer, Agok took it as a sign to start the siomai eatery.

“The moment he told me he is ready to open a siomai eatery, I bought 50 pieces of pusô and a dozen packs of iced tea,” she said.

The business is officially registered as “Siomai sa Balay Eatery” and is being run by family members.

On production days, Agok said he is usually assisted by four to five family members. Another six to eight relatives help out in serving customers.

“We pay them, of course. They work so they need to be compensated,” said Marell.

Agok said they have a slimmer profit margin compared to those who sell siomai by the piece.

The siomai pieces are also bigger than the regular size sold in other stores.

Agok does not add any extenders so customers are assured that what they are eating is real meat.

The meat is sourced from Carbon market. The wrappers are sourced from Bacolod because they taste better than those sold in supermarkets.

“We emphasize the importance of quality product because that will make our customers come back and continue patronizing us,” said Marell.
Marell said she does not believe in short-term success by shortchanging customers on quality.

“The business will not last if you do that. When we decided to do this business, we thought about long term sustainability because this is for our family members. They will take over this business in the future,” she said.

In his 11 years of making and supplying siomai, Agok observed that one person can consume an average of 12 pieces of siomai and six pieces of pusô.

“When I was doing my costing and computation, I reached one hundred (pesos) as a reasonable amount for unli-siomai and unli-pusô. It is enough for us to earn a profit and it is an affordable price for people to enjoy siomai,” he said.

Because of the success of the unlimited siomai, plans are underway in opening one branch within Cebu City.

Agok is going to Dipolog soon to close a deal with another business partner.

Marell said they are also tapping more partners and supply them with siomai.