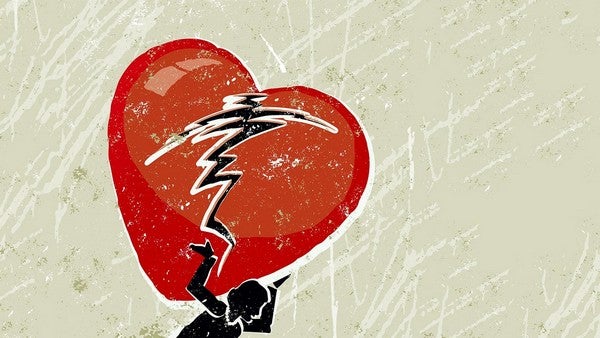 PEOPLE with symptoms of depression or who take antidepressants have a 30 percent increased risk of developing a type of irregular heartbeat called atrial fibrillation that increases the risk for stroke, a new study says.

The research, released at the American Heart Association’s Epidemiology and Lifestyle conference in New
Orleans, tracked 6,644 people over about a decade.

AFib, a quivering or irregular heartbeat in the upper chambers of the heart, affects about 33.5 million people.

Researchers expect the number to double by 2050. Untreated, AFib doubles the risk of heart-related death. It increases a person’s chance of having a stroke five-fold.

Depression affects about 16.2 million adults in the United States, according to the 2016 National Survey on Drug Use and Health.

Previous research has investigated this mind-heart link, showing depression or anxiety are intertwined with AFib in several ways.

“There is a complex relationship between depression, anxiety, and AF,” wrote the authors of a 2013 study published in the journal Cardiovascular Psychiatry and Neurology.

Another 2013 study, published in PLOS ONE, said doctors should be more aware of the presence of the two conditions, and how one can impact the other.

“Changes in depressive symptoms could lead to better quality of life and might affect outcome in AF individuals in the general population,” the PLOS ONE study authors wrote. “Importantly, proper treatment and prevention of AF recurrence has the potential to significantly reduce depressive symptoms and finally, reduce health care costs.”

This latest study was a multi-ethnic look at the issue. Garg said previous studies about the link between depression and AFib included mostly participants who were white or women. In this study group, participants were: 53 percent women, 38 percent white, 28 percent black, 22 percent Hispanic and 12 percent Chinese-American.

As for why depression might be a factor in developing AFib, Garg said more study is needed but it may be related to chronically increased levels of inflammation or of catecholamines and cortisol, which are hormones released during stress.

“If our findings are affirmed in future studies, especially those that formally assess for clinical depression,” Garg said, “then we will need to see if treating depression may, in fact, lower the risk for atrial fibrillation.” ()