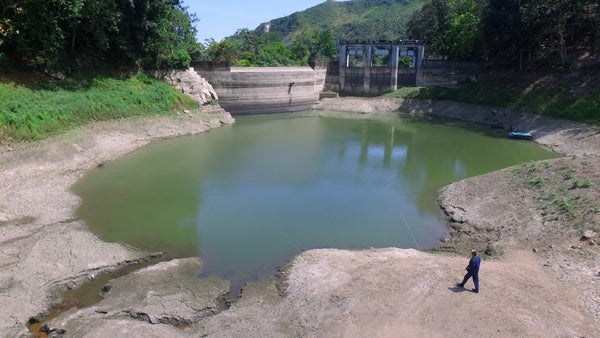 Water levels of the Buhisan Dam, one of the major sources of water of the Metropolitan Cebu Water District (MCWD) could go down as a hot, dry summer season opens. The public is urged to store and conserve water and be frugal with its use. CDN FILE PHOTO

THE public will have to brace for low and interrupted water supply in Metro Cebu in the coming weeks.

The Metropolitan Cebu Water District (MCWD) announced that the volume of potable water produced will start to decline as summer draws near, and that nitrate contamination was discovered in eight ground wells.

This prompted not only MCWD officials but also Engr. Oscar Tabada, Visayas Director of the Philippine Atmospheric Geophysical and Astronomical Services Administration (Pagasa) to urge residents to conserve water.

Tabada, in a forum with MCWD officials yesterday, announced that state meteorologists have projected for summer to officially begin on Good Friday, March 30, or when Tropical Storm Caloy finally exits the Philippine Area of Responsibility (PAR).

“The latest we can declare the start of dry summer is in the first week of April. We’re already in talks with other Pagasa officials in Manila and we reached a consensus that we can declare summer once Caloy is out,” he said.

With the start of the dry season, Tabada said the water supply will inevitably run low.

“We projected that in April alone, there will be only an average of five days wherein Cebu can experience localized rain showers,” he added.

On the other hand, Engr. Michael Diola, acting chief of the Distribution Division of MCWD, told reporters that they found at least eight ground wells contaminated with nitrate coming from plant fertilizers and open septic tanks.

He said they would have to treat the water from these ground wells so that water sourced from them will be clean and safe to consume.

“We’re going to de-nitrify these wells wherein we’re going to remove the nitrate. Maybe by May, our denitrification process will be finished and water supply in these affected areas may resume to normal,” said Diola.

Diola said there will be water supply interruptions in these areas especially during peak hours or when the demand is high. He also said that they suspended new service connections in these locations.