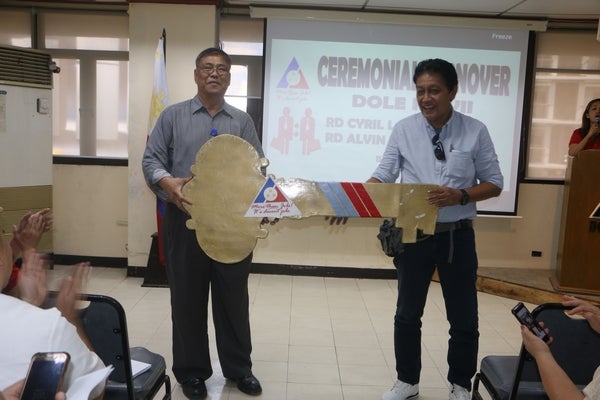 With his appointment, Villamor will now supervise all divisions and units under Dole-7 including its field offices located in the cities of Cebu, Mandaue and Lapu-Lapu and the provinces of Cebu, Bohol, Negros Oriental and Siquijor.

Ticao, who will now be reassigned to the Dole office in region VIII, formally turned over his responsibilities as Central Visayas director to Villamor in a ceremony held at the Dole-7 office on Wednesday.

Also present during the turnover ceremony was Dole-7 Assistant Regional Director Roy L. Buenafe, who came from the Dole RO-VIII and used to be the region’s mediator-arbiter.

In his message, Villamor sought the cooperation of the people who will be working under him for them to achieve their organizational objectives.

“It is certainly not acceptable when one does something because it is what he or she wishes, thereby sacrificing the greater good of, and the kind of public service that the department always aims to deliver,” said Villamor, who was earlier assigned at the Dole-IVB office in MIMAROPA region.

The region consist of Oriental and Occidental Mindoro, Marinduque, Romblon and Palawan provinces.

An Ilocano by heart, Villamor expressed confidence that he will be able to work well with his division heads and their staff and learn from each other.

“In an organization, personality clashes, sudden abnormalities, and glitches are but normal. Despite differences among each one, I’m hoping that the organization as a whole would be able to employ correct intuition, insights, and wisdom in handling and hurdling various difficulties,” he added.