THE POWER OF ZUMBA 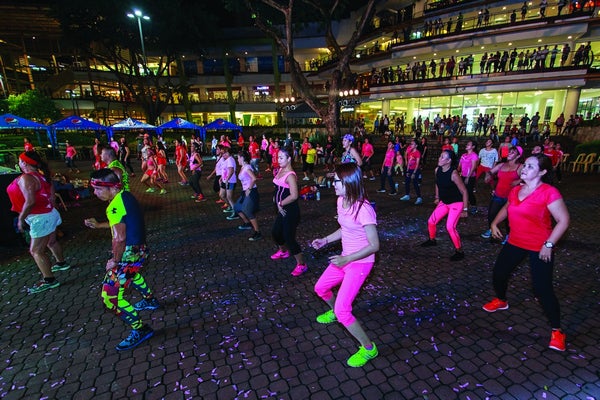 BY THIS time, zumba—which the Mayo Clinic describes as a fitness program of Latin and international music combined with dance moves—has gathered a force of believers and doers in Cebu who embrace this exercise regimen to stay healthy and fit.

My mother—a 50-year-old mother of four and grandmother of five—has sworn loyalty to this fitness/dance routine which has given her more energy and reason to fight diabetes and keep her blood cholesterol in check.

Cebu’s malls have since dedicated space and time for the daily, if not weekly, treat for mallgoers and shoppers.

At SM Consolacion, regular zumba sessions happen on Wednesdays and Fridays at 6 p.m.

As part of their summer fitness activities from April 4 to May 25, Ayala Center Cebu has Gold’s Gym Zumba Fitness sessions on Wednesdays and Fridays from 6 to 8 p.m. at The Terraces with no registration fee.

The list goes on with Parkmall and Gaisano malls all over Cebu bringing zumba closer to mothers looking for ways to lose weight in a fun and unintimidating environment.

Mother of five, Maria Lamercan religiously goes to SM Consolacion, located about 10 minutes from her home.

She started on the zumba fitness routine eight months ago after hearing about the free sessions at the mall from her neighbors.

Maria, 38, sells ready-to-wear clothes, while her husband is an international seafarer.

Zumba, she said, takes the pressure off from the responsibilities at home as she is raising children between the ages of 19 and 8.

“I also met new friends because of Zumba. Many of them are mothers with different challenges in life,” she shares.

Jenner Keith Maquiling, a Zumba instructor since 2013, says Zumba means 45 minutes to an hour of fitness variation and cardio dance which works the muscles for core strength and agility.

“Zumba is fun, easy to follow and the music simply makes you move. It’s also an eye-opener (introduction) to fitness. Some ladies say health benefits can be achieved through dancing,” says Keith, a mass communications graduate of Ateneo De Manila University.

During the Story Hours culmination at J Centre Mall last Feb. 24, Keith had close to 100 children groove to the music employing steps and dance moves he learned as a license instructor of Zumba Kids.

It was a fitting end to the three-hour program filled with stories and sharing from children, parents/guardians and teachers.

Last year, he made use of his Zumba Sentao training in getting 24 senior citizens to move as part of the kick-off activity of a day-long post-Christmas, pre-New Year celebration. The lolos and lolas are “residents” of the Ramon Durano Foundation Home for the Aged in Barangay Guinsay, Danao City.

In Zumba Sentao™, a chair is utilized as a “dance partner” hence it is described as an “explosive chair-based choreography that will strengthen, balance and stabilize the core, and step up cardio work in a whole new way.”

Keith moved to Cebu from Manila in 2013 when Gold’s Gym opened at J Centre Mall. He has lived in Cebu since then and is now fluent in the Sinugbuanong Binisaya language. In his previous life, Keith worked as a product specialist and production assistant.

His Mommy Lily was his first mentor. Mommy Lily started teaching in the early 90s. Now 55, she still teaches kickboxing and Zumba.

“I started teaching in early 2009 and (it was) my mother (who) taught me everything,” he said.

Keith is a member of the Aerobics and Fitness Association of America and Zumba Instructors Network.

Zumba is a combination of many dance styles but Keith says its four basic steps involve merengue, cumbia, salsa and reggaeton.

Aside from improving good health and mobility, Keith says Zumba creates friendship and allows participants to enjoy a great time in an atmosphere full of fun.

It is not uncommon for participants to approach and tell him about how Zumba changed their lives.

“Many of them say Zumba made them develop self-respect for their bodies,” says Keith.

With women loving themselves, they become better at managing household responsibilities and are better in getting family members to help them out.

In the process, Keith says they have developed better relationships with the family members.