Oponganons urged to wage war for the protection of nature 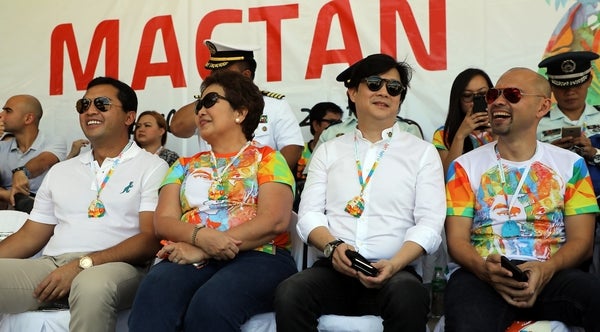 YESTERDAY’S 497th commemoration of the Battle of Mactan was an important reminder for Oponganons to never forget the heroics of Datu Lapu-Lapu who waged a bloody war against foreign invaders.

Almost five centuries from that historic battle on the shores of Mactan, Oponganons are again called to battle, though less bloody but just as important — the war to protect the island’s pristine beaches, breathtaking dive spots and their tourist destinations.

This was the call made by DOT Regional Director Shalimar Tamano and Presidential Assistant for the Visayas Michael Dino, who were the guests of honor during the reenactment of the historic battle.

Tamano told an estimated crowd of 5,000 at the Liberty Shrine that with the closure of Boracay Island for six months, Mactan Island is expected to get the lion’s share of tourists looking for alternative destinations.

“Lapu-Lapu City is No. 1 in terms of tourist visitations in Region 7 with more than a million tourist visits this year out of the 2.9 million total followed by Cebu province,” said Tamano.

He said another victory for Oponganons is the upcoming opening of the Mactan-Cebu International Airport’s Terminal 2 on July 1, 2018.

He also encouraged hotels and resorts to comply with environmental laws to ensure their continued operations.

He said they are targeting 7.5 million tourist arrivals in the region for 2018. And for the first quarter alone, 2.9 million arrivals have been recorded.

Tamano said they are also coordinating with the police and the Armed Forces of the Philippines for the security of the visitors.

Hembler Mendoza, Tourism officer of Lapu-Lapu City, said that 95 percent of the around 80 hotels and resorts on the island were already occupied and could be fully booked by next month.

Dino, for his part, called on the island’s officials and its people to join hands in taking care of their tourist destinations by maintaining the cleanliness of the seawaters and preserving the peace and security of everyone.

Meanwhile, during her opening message, Mayor Paz Radaza said that the heroism of Datu Lapu-Lapu has provided Oponganons with a sense of pride that has been passed on from one generation to another.

She also lauded the efforts of Rep. Aileen C. Radaza whose bill declaring April 27 of every year as special non-working holiday for the City of Lapu-Lapu is now awaiting the signature of President Rodrigo Duterte.

“This milestone makes us even more proud of the victory of a great warrior, Datu Lapu-Lapu. May his determination and dedication to protect this land against Magellan encourage us Oponganons to protect our city and make it grow,” said Radaza.

Read Next
P. Engaño chairman not yet proclaimed