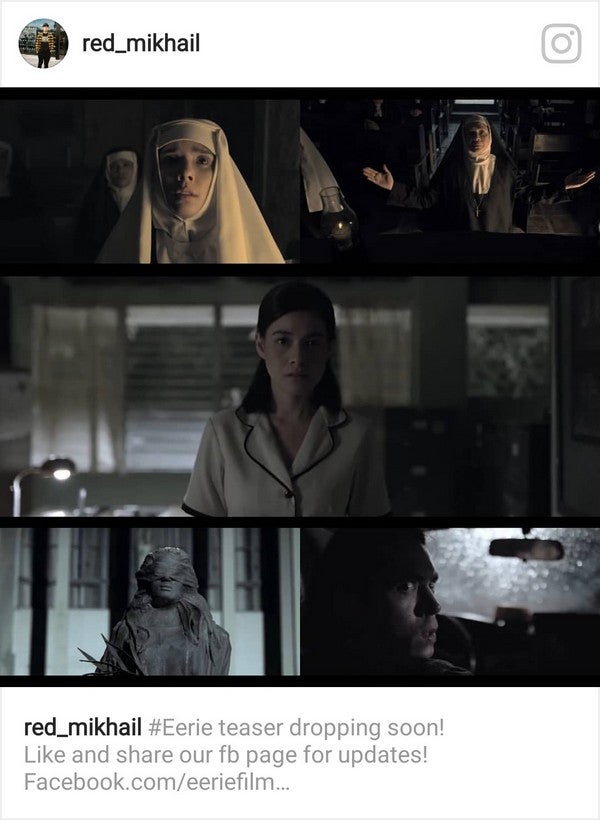 The teaser starts by introducing a Catholic school named Sta. Lucia Academy for Girls. The story is set in the 1990s.

“The film centers on a clairvoyant counselor who investigates a murder in a Catholic school where the only witness is the ghost of a suicide victim,” the post read.

Alonzo plays the school counselor while Santos-Concio is the school’s mother superior.

One of the photos she shared was with award-winning director Mikhail Red who is known for his gripping film, “Birdshot,” the country’s entry to the Best Foreign Film category of this year’s Academy Awards.

“Now rolling. Learning a lot from this young director,” she said.

Red has also been updating his Instagram followers about the shoot.

He shared a group photo with the lead stars with the caption, “The calm days are over. Rain effect, lightning, wind machines, blood/make up, and chase scenes! Leg 2, we’re ready for you! Let’s go team.”

“Eerie” is the second horror movie of Santos-Concio since the 1976 film “Itim” by acclaimed filmmaker Mike de Leon.

It is Alonzo’s first horror film.

Other stars in the film are Maxene Magalona and Jake Cuenca.