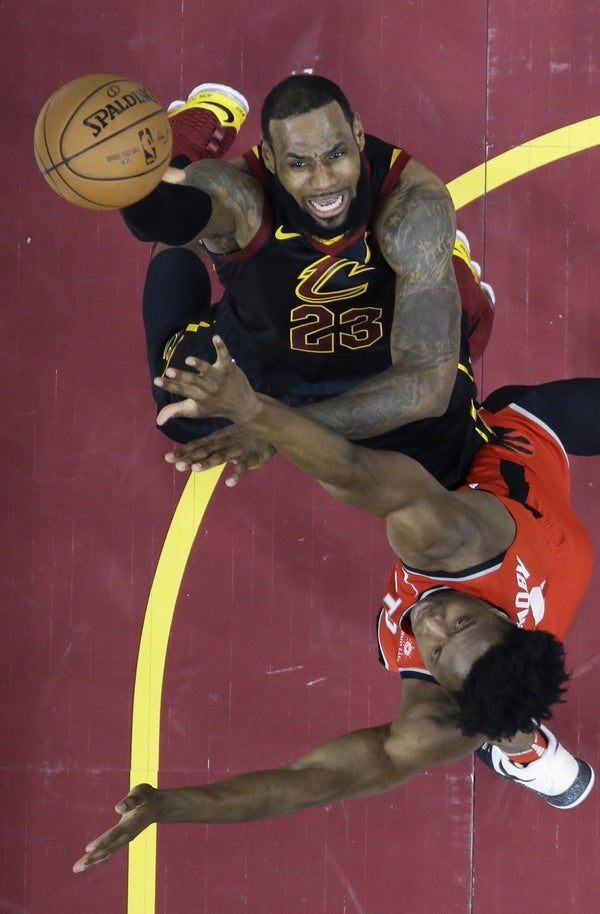 Cleveland Cavaliers’ LeBron James shoots against Toronto Raptors’ OG Anunoby in the first half of Game 4 of their NBA second-round playoff series, yesterday in Cleveland. /AP

CLEVELAND — LeBron James sent Toronto into summer vacation for the third straight season as the Cleveland Cavaliers completed a series sweep of the Raptors with a 128-93 win in Game 4 on Monday night to advance to the Eastern Conference finals.

James finished with 29 points, 11 assists and spent some of the final 7:38 dancing near the bench during Cleveland’s 10th straight playoff win over Toronto, which changed its system, its roster and its approach but still can’t beat the game’s best player.

Kevin Love added 23 points and J.R. Smith 15 for the Cavs, who can now rest while waiting for the Boston-Philadelphia semifinal series to end.

Jonas Valanciunas scored 18 and Kyle Lowry had 10 assists to lead the exasperated Raptors. Toronto’s frustration hit its peak late in the third when All-Star DeMar DeRozan was ejected for a flagrant foul.

In Philadelphia, T.J. McConnell turned a surprise start into the save of the season and Dario Saric scored 25 points to help the 76ers stave off elimination in a win over the Celtics in Game 4.

The Sixers still face daunting odds headed into Game 5 and trailing 3-1 in the Eastern Conference semifinals: No NBA team has ever won a series down 3-0.

McConnell had a career-high 19 points, seven rebounds and five assists in only his second start of the season and meshed well in the backcourt with Ben Simmons. The crowd chanted “TJ! TJ!” each time he touched the ball in the fourth and proved why he has been so valuable even as bigger stars have sliced his playing time.

He was just what coach Brett Brown needed in a must-win game.

With NBA teams down 3-0 having lost all 129 series, the Sixers may need more than spirit to pull off this stunner.

Jayson Tatum led the Celtics with 20 points and Marcus Morris had 17.

Read Next
Joint venture deal at Kawit put on hold