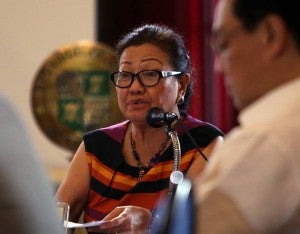 The movement of cybersex dens from small, remote villages in the province to subdivisions in Metro Cebu made it harder  for the Cebu provincial government and police authorities to crack it down.

Unlike in the past, the alleged perpetrators bring the women to houses in middle-class subdivisions making the operations more discreet and private, Vice Gov. Agnes Magpale said.

“I must admit that we’re having a harder time now because they are in subdivisions, not really on high-end ones but they have a house,” said Magpale who heads the Provincial Women’s Commission (PWC).

“So what we do is ask their neighbors in the area because they themselves have been alarmed by the teenage girls and young women who’ve been going inside the subdivision,” she said.

Magpale said the PWC and the National Bureau of Investigation (NBI-7) in the region placed a number of subdivisions under surveillance in towns and cities around Cebu.

“I would not say that it’s rampant in the city but it would be unfair to say that it is only happening in Cordova,” she said.

But Magpale declined to reveal the exact location of the suspected cybersex dens to avoid preempting the surveillance.

She said they’ve also been looking closely on a similar case in the province wherein teenage high school girls frequent a residence of a foreigner and leave in the wee hours of night.

The operations based in Cebu City employ women from the province’s towns and cities, she said.

“We have a hard time on how to enter those cases because it’s the city’s jurisdiction. We have to find at least one victim from the province so that we can take possession of the case,” Magpale said.

Charges of estafa and violation of Republic Act 9208 or the Anti-Trafficking in Persons Act of 2003 were filed against her and a Filipina employee last Monday.

10-year-old girl made to pose for web camera