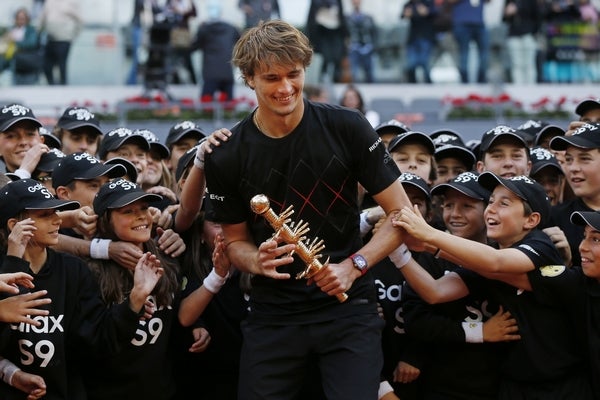 Alexander Zverev of Germany holds the trophy while posing with volunteers after defeating Dominic Thiem of Austria 6-4, 6-4 during the men’s final of the Madrid Open Tennis tournament in Madrid, Spain yesterday. /AP

Madrid — Second-seeded Alexander Zverev eased past fifth-seeded Dominic Thiem 6-4, 6-4 to win the Madrid Open on Sunday, claiming his second title in a week.

The German broke Thiem’s opening service games in each set and didn’t give his Austrian rival a single break chance to win in 1 hour, 19 minutes.

Zverev won his eighth career title and second of the season after also winning the Munich Open last weekend.

“It is unbelievable,” Zverev said. “This is my third Masters 1000 and I am only 21 years old. It has been an amazing journey.”

Zverev dominated the entire week in the Spanish capital, not losing a single set en route to victory.

Thiem lost his second consecutive final at the Caja Magica. He avenged last year’s final loss to Rafael Nadal by beating him in Friday’s quarterfinals for the Spaniard’s first clay-court loss in a year.

Serving to close out the first set, Zverev trailed 0-30 but used his big serve to force deuce and finally closed out the point when Thiem’s return sailed long.

Zverev started the second set in similar fashion, hitting a deep forehand that Thiem could only send into the net on the final point of his service game to fall behind a break.

It was Zverev’s second win in six meetings with Thiem.

Read Next
PSC, WKF to hold referees course during PNG