Elections peaceful except for 11 incidents 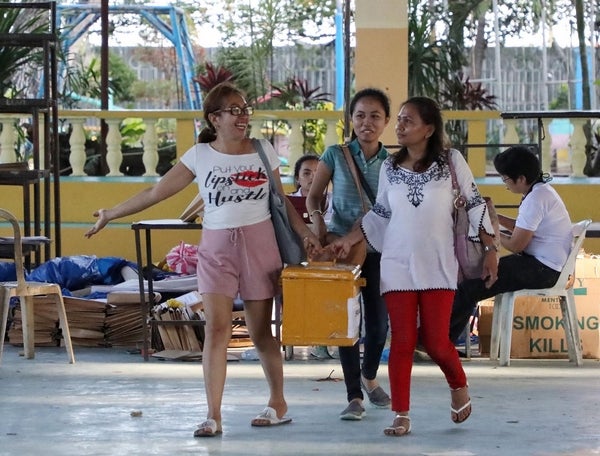 Teacher- volunteers from Barangay Gimamaa are elated to have finished counting the votes all night and to have submitted the election returns to the Comelec at the Tuburan covered court for canvassing.

THERE were 11 election-related violent incidents recorded in the region since the start of the campaign period.

According to Police Regional Director, Chief Supt. Robert Quenery, elections were generally peaceful, except for the strafing of the house of reelectionist, Barangay Captain Reynato Albios in Barangay Bulak, Dumanjug town in Cebu early morning on election day.

Meanwhile the Commission on Elections in Region 7 have already canvassed 100 percent of the returns and proclaimed the winners, except for those who tied with their rivals. The winner will be determined through a coin toss (see separate story).

“All the results have been encoded,” said Petalcorin. As to voter turnout, this could still not be determined until all the documents are submitted by the electoral board of canvassers.

Quenery said among the incidents on their records is the encounter between government forces and alleged members of the New People’s Army (NPA) in Bilar town, Bohol.

On May 12, a candidate for barangay councilor in Barangay Gabayan, Lazi Siquijor was arrested for alleged vote-buying. Alberto Borongan is now facing a complaint before the Comelec in Siquijor.

On the same day, a certain Marcelino Baja, 52, who claimed to be a supporter of Jun Castacio, who ran for barangay councilor in Barangay Trinidad, Guindulman, Bohol, was also arrested for alleged vote-buying.

There were also arrests for violation of the liquor ban and driving under the influence of liquor, in Bohol and Cebu.

Arniel Caiña, 44, an incumbent barangay councilor of Barangay Poblacion, Lila, Bohol was arrested for violation of R.A. 10586, or an act penalizing persons driving under the influence of alcohol, drugs and similar substances.

Marcelino Dote, also of Bohol was also arrested for violating the liquor ban. In Cebu City, Rudy Macalaguing, 27, a resident of Sitio Sambag 4 Barangay Guadalupe was nabbed for the same offense. In Lapu-Lapu City, Meliton Austerio, 64, of Barangay Agus, was arrested for drunkenness.

And four days prior to the election a shooting incident happened in Barangay Cambitoon, Inabangga, Bohol.

And also the incident in the town of Daanbantayan.

Also on the police list of incidents was the ambush of Daanbantayan Mayor Vicente Loot and his family.

They survived the assault but their two drivers and a nanny were injured.

Yesterday morning, a boat capsized in the waters of Bien Unido, Bohol, boarded by election officers and PNP escorts, said Quenery. The Comelec has assured that the election officials and their PNP escorts are safe.

Read Next
File SOCE on time or face sanctions