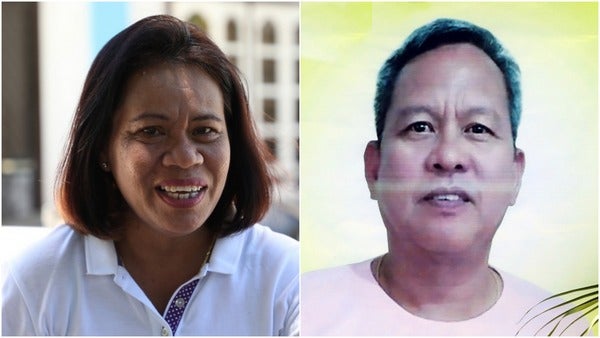 A CHURCH choir member has sent Fr. Oscar Banzon crashing back to earth.

Charito Arreglado of St. Ignatius of Loyola Parish’s Centennial Choir in Kawit, Medellin town has put an end to Banzon’s stint as barangay captain of the village, defeating her former parish priest by 919 votes in Monday’s polls.

“I didn’t expect this,” said Arreglado who was defeated by Banzon in the 2013 barangay elections by 79 votes.

“I believe the controversy that he’s dealing with paved the way for his defeat,” she added.

In 2013, Banzon was suspended by Cebu Archbishop Jose Palma after he ran and won as barangay captain in Kawit, the biggest village in the sugarcane-producing town of Medellin.

The 68-year-old priest also openly admitted that he was in a relationship with a councilwoman in Kawit. They eventually broke up, prompting Banzon to court another woman.

But his recent defeat also ended his relationship with his “girl.”

“Sa dihang napildi ko, wala naman ko tagda. Basin gitagad lang ko niya basin tungod ra sa akong pagka-kapitan. (When I lost last Monday, she no longer entertained me. I think she only attended to me before because of my position as barangay captain),” Banzon told Cebu Daily News.

He considered his defeat in the elections as a divine sign for him to reconsider returning to the active ministry as priest.

“The voice of the people is the voice of God. No questions asked. No hurt feelings. This must be God’s will,” Banzon said.

The priest-turned-barangay captain said he will have to spend days to reflect on what move to take.

Banzon, however, expressed apprehensions of returning to the active ministry, saying he was embarrassed after he defied Archbishop Palma’s advice not to seek an elective post in 2013.

“Sipyat man gyud nga niapil kog politika. Nauwaw ko sa akong kaugalingon nga nisupak ko niya. (It was a wrong decision for me to take part in politics. I’m ashamed of not obeying him),” he said.

Cebu Archbishop Palma was not available for comment on Tuesday.

Msgr. Joseph Tan, spokesperson of the Archdiocese of Cebu, advised Banzon to seriously think what step to take following the latter’s defeat in the elections. /with reports from Nestle L. Semilla

Read Next
Diamante allies win in 44 of 54 brgys