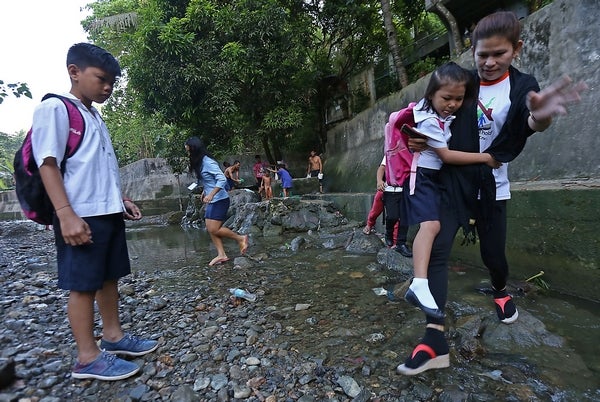 CHALLENGES IN GOING TO SCHOOL. In some mountain barangays like in Cebu City’s Barangay Sapangdaku, students and their parents have to cross a river daily to get to the Sapangdaku Elementary School.

Mildred Pineda has been a teacher in a public school in Cebu City for 15 years.

And she saw the same problems exist especially during the opening of classes: lack of classrooms and shortage of teachers.

“The number of students in a class is just too many and they can’t focus on the lessons anymore,” the 55-year-old teacher of the Mabolo National High School said in an interview on Monday.

Overcrowding in classrooms has been a problem in many public schools in the country.

In the cities of Cebu, Mandaue, Lapu-Lapu, and Talisay, some schools had to divide their class schedules into three shifts to accommodate the
enrollees — one in the morning, another in the afternoon and in the evening.

The Department of Education (DepEd) said about 1.8 million students were enrolled in different public elementary and secondary schools in Central Visayas for the school year 2018 to 2019 but only 100,000 to 200,000 enrollees were expected to study in private schools.

The DepEd said 3,102 classrooms had been earmarked to be built in Bohol, Cebu, Negros Oriental and Siquijor but only 1,291 had been completed in time for the school opening on Monday.

Construction of 1,604 others remained ongoing while the rest had yet to break ground as of May 2018.

A budget of P5.261 billion had been allocated for the project.

DepEd officials from Talisay City sought the help of the Talisay City government to help address the shortage of classrooms.

Aside from the shortage of classrooms, the DepEd also needed at least 6,000 teachers in the region to meet the ideal one-teacher-to-35 students ratio.

The DepEd-7 was aware of the problem and had sent its Regional Field Technical Assistance Team (RFTAT) in various schools to look into the situation, said Villarmia.

“They were tasked to monitor and validate if there were problems in the enrollment, their infrastructure needs, (and check with) the teachers and students if they had complete learning materials. We were also looking into their best practices that other schools may adopt or apply for the benefit of their students,” she said.

The RFTAT was composed of representatives from their Quality Assurance Department, Education Support Department, Human Resource Department, Field Technical Assistance Department, Planning and Administrative Department, Curriculum and Learning Management Division and from the different chief supervisors of the eight divisions in the region.

Dr. Danilo Gudelosao, assistant superintendent of DepEd-Cebu City Division, said there were 5,500 public school teachers in over 100 public schools in the city.

But the number was not enough to handle over 180,000 students in elementary and senior high school levels.

“We had yet to determine the number of teachers needed because we expected the number of students to increase in the next three to five days,” Gudelosao said.

At least 130 public school teachers were deployed on Monday in Barangays Guadalupe and Ermita, and in other highly populated schools in Cebu City where the student population reached more than 10,000.

Of the 3,800 teaching positions needed, only 70 percent had been filled up.

Gudelosao said he believed overcrowding in classrooms would affect students’ learning as well as the welfare of the teachers.

“Right now, there are instances when one teacher needs to do his or her lecture in front of more than 45, 50 or 80 students,” he said.

“(This) would greatly affect the learning process of the students. If there’s only one teacher teaching more than 80 students, the classroom will get cramped, and they will get uncomfortable. Then everyone cannot focus on the lessons being discussed,” he added.

Gudelosao said DepEd-Cebu City would be deploying additional teachers by batches in the coming days to address the problem.

In Mandaue City, the public schools in Paknaan only accepted enrollees from the village to address overcrowding in classrooms.

Estela Susvilla, assistant schools division superintendent of DepEd Mandaue, said the Paknaan Elementary and High School was looking for an available space where they could build a new school building.

Despite the perennial problems plaguing the first day of classes, the police didn’t receive any report of untoward incident.

Sina, however, urged all policemen to continue monitoring and ensure the safety of the students, parents and teachers. /with reports from John Aroa, Nestle Semilla and STC Interns Candy Morr Baraga and Jaia Agbon

Read Next
LTFRB to students: Sue drivers who won’t give discount