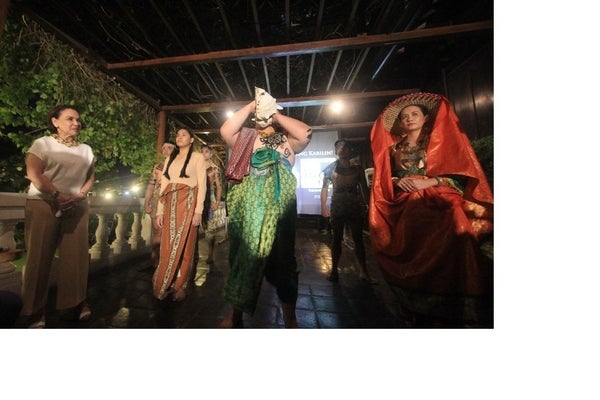 The ceremonial sounding of budyong at the Casa Gorordo Museum, with Cebu City Councilor Margarita Osmeña, signaling the start of the 2018 Gabii sa Kabilin.  CONTRIBUTED PHOTO

A heavy rain threatened to spoil Cebu’s favorite summer heritage event last May 25, but as if on cue, it stopped when the Gabii sa Kabilin (GSK) started at 6 p.m.

Like a theater curtain, the thunderstorm gradually lifted allowing patrons to enjoy the presentations held in the 29 participating museums and heritage sites. About 4,000 people were joining the event.

This year, Gabii sa Kabilin invited the public to re-discover the pre-colonial roots of Visayan culture. Its theme, “Balangay,” set the tone for the exhibits and programs in a number of sites that focused on the pre-Hispanic aspects of local culture such as family life, religious beilefs, social structures and folklore.

The museum produced a live presentation, narrating and depicting a day in the life of a family and a wedding ceremony that showcased pre-Hispanic social norms as well as beliefs on beauty and fashion, the afterlife and the supernatural. 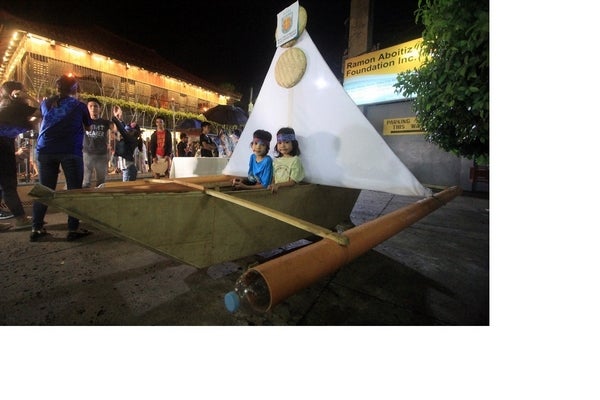 Children pose while aboard the mini-balangay, one of the children’s activities organized by RAFI’s Dolores Aboitiz Children’s Fund.

Museo Sugbo depicted a pre-colonial Visayan village while Museo Parian sa Sugbo-1730 Jesuit House, the Archdiocesan Shrine of the Most Sacred Heart of Jesus, and the Fo Guang Shan Chu Un Temple brought attention to the presence of Chinese culture in Cebu before European contact.

New participant, San Pedro Calungsod Shrine at the Archbishop’s Residence compound, not only opened the shrine late into the night, but also exhibited their Calungsod memorabilia and presented a 15-minute production establishing and emphasizing the characteristics of the first Visayan saint as characteristics of Filipino boys in pre-Hispanic period.

The University of the Southern Philippines Foundation (USPF) Rizaliana Museum also reopened their museum to the public.

The USPF-Rizaliana Museum now highlights the life of our national hero, Dr. Jose Rizal, as a sojourner in Europe—his student life, people he met, and the circumstances that led to the writing of his first novel, Noli Me Tangere.

Special activities were held that drew in young audiences.

They even had a small balangay that children could ride on to get to the activity area. 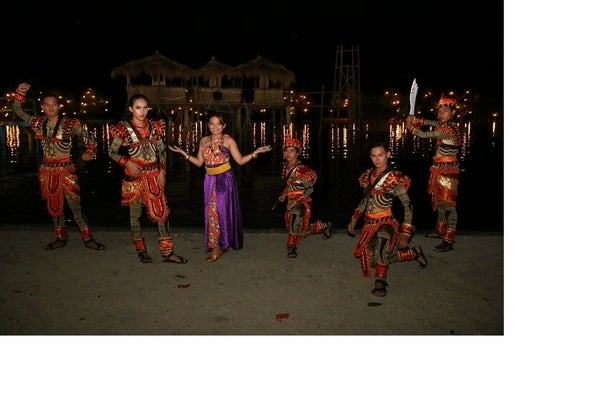 Local dancers perform indigenous dances at the Lapu-Lapu Shrine with a sample of the pre-colonial houses as background.

The second run of the GSK Heritage Hunt tested the determination and wit of seven teams of millenials through nine challenges, five of which they had to finish in three hours. For the more instrospective, a blogging / vlogging contest was opened.

The subject of the photo contest was the bangka, a derivative of the pre-Hispanic balangay.

It attracted more than 20 entries that will later be posted in the Gabii sa Kabilin’s official Facebook Page for a liking contest.

The opening ceremony at the Casa Gorordo Museum featured the unique sounding of the budyong. Sounding the budyong, which in pre-Hispanic Visayas signified a call for the village to gather for a special communal event, was attended by Cebu City Councilor Margarita Osmeña.

Gabii sa Kabilin’s theme for 2018 and the next three years have the same objective, which is to heighten the Cebuano public’s awareness of the the quincentenial celebration of the arrival of Magellan’s fleet in the Philippines. T

he themes for Gabii sa Kabilin from 2019 to 2021 will be inspired by the historic voyage of the explorer that changed the world forever.

Cebu is expected to be one of the focal points of this global celebration in 2021 as this is where Magellan met his death.

Gabii sa Kabilin is held every May in celebration of the Philippines’ Heritage Month. It is initiated by the Ramon Aboitiz Foundation, Inc. (RAFI) and implemented in partnership with the Province of Cebu and the cities of Cebu, Lapu-lapu, Mandaue and Talisay.