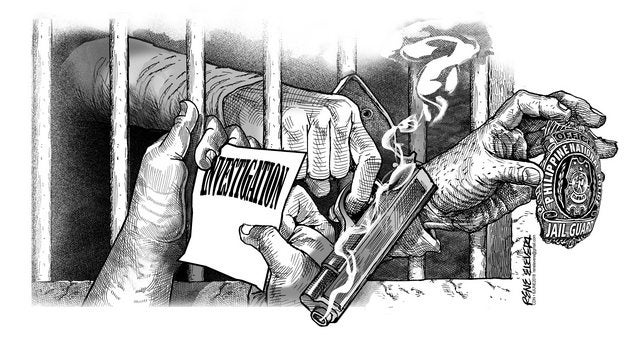 If public sentiment were to serve as gauge in dealing with jail guard Myron Garcia, who surrendered to the Guadalupe police almost immediately after shooting 19-year-old Edilbert Edlisan who was caught smuggling in cigarettes at the Cebu City Jail, he would be exonerated.

In fact, he may even get a commendation and not be relieved from his post by the regional Bureau of Jail Management and Penology (BJMP) pending the results of the investigation into the shooting which led to Edlisan’s death and the wounding of his accomplice Arnel Canduroy.

The investigation is being spearheaded by, among other agencies, the Commission on Human Rights (CHR) who will invite public contempt and ridicule for “siding” with the perpetrators even as they would provide legal aid to the families of Edlisan and Canduroy.

But Garcia need not worry as the Cebu City government is prepared to give legal aid to him in their belief that his prosecution will only discourage jail guards from cracking down on those who smuggle cigarettes and other contraband to the inmates.

If Garcia’s statements were true—and there may be witnesses who will verify his claim—then he was justified in shooting Edlisan whom he claimed had carried a gun and threatened him with it.

But Senior Insp. Eduardo Sanchez, Guadalupe police precinct chief, said there was no firearm recovered from Edlisan that would compel Garcia to fire at him, hitting him on the nape that caused his death.

If Garcia’s purpose was to fire warning shots, he could have fired them in the air or in a way that won’t harm anyone while warning Edlisan and Canduroy that he meant business and their illegal activities won’t be tolerated.

While the city government can provide legal assistance to Garcia, we don’t see why jail guards would be discouraged from their duties in securing the jail if Garcia is prosecuted should there be sufficient evidence proving that he meant harm, not just stopping Edlisan and his accomplice.

We’d like to believe that Garcia did his duty to the best of his ability during that incident and he had no intention to kill Edlisan, who like the others continued to smuggle contraband at the jail despite repeated warnings from Garcia and his fellow guards.

That fact alone would earn Garcia popular support since most people, aka supporters of the incumbent administration, had shown little tolerance for criminal suspects and their rights to due process. But since these rights are enshrined in the Constitution, the authorities have to investigate and determine Garcia’s innocence or guilt in the incident.