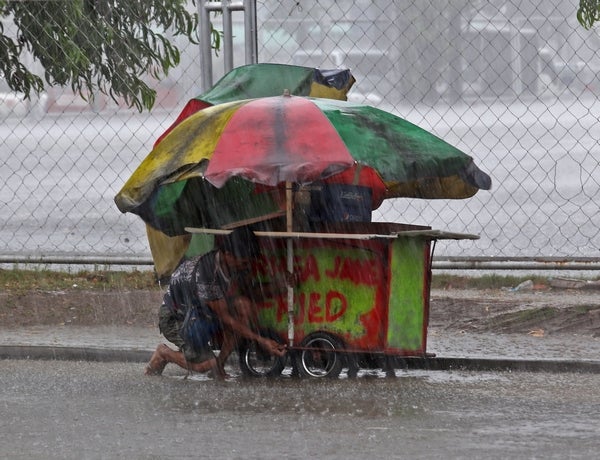 A vendor who sells fried chicken at the side of the road near a mall at the North Reclamation Area fixes his cart and takes shelter under a huge umbrella as heavy rains started to pour. Pagasa Mactan officially declared the start of the rainy season on Friday and warned the public on the onslought of landslides, flash floods and storm surges which come with the season.

The wet season is on.

The state weather bureau on Friday declared the onset of the rainy season which is expected to last until November.

While it is a welcome respite from the sweltering summer heat, Engr. Alfredo Quiblat, chief of the Philippine Atmospheric, Geophysical and Astronomical Services Administration (Pagasa) in Mactan, said the wet season will bring flash floods, landslides, and at least two tropical cyclones every month.

“There will be increased number of days with rains, and we also expect the volume of rains to rise,” he said in an interview.

“There has already been a shift in wind directions and emergence of the southwest monsoon (habagat), and there were five consecutive days of rains in the western section of the country which had brought at least 20 mm or more of rainfall,” he said.

Quiblat urged local government units and households to clean ditches and drainage systems to minimize the effects of flooding.

On Friday, Pagasa issued a gale warning in eastern Visayas due to rough seas caused by Tropical Storm “Domeng.”

Domeng was last spotted 655 kilometers east of Tuguegarao City Guiuan, Eastern Samar, with maximum sustained winds of 65 kilometers per hour near the center and gusts of up to 80 kph.

Quiblat said Domeng is set to leave the Philippine Area of Responsibility (PAR) on Sunday morning.

Although no gale warning was issued in Central Visayas, Quiblat discouraged fishermen from sailing, saying it was unsafe to do so due to huge waves.

The combined effects of “Domeng” and the southwest monsoon brought scattered rainshowers over Luzon and Visayas.