To Anthony Bourdain, a tribute and thanks 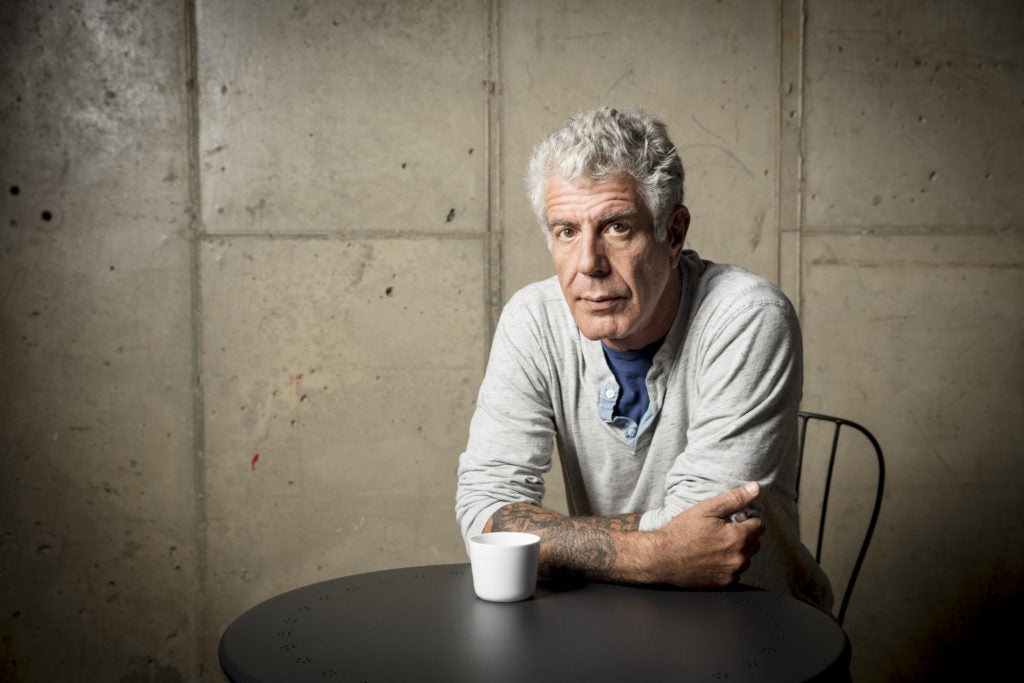 That was all it took to send shivers down the spine of the blogger Marketman and his lechoneros who waited in bated breath to see what his reaction would be to the lechon he travelled thousands of miles to taste. Chef Anthony Bourdain continued to take bites of the crispy, caramelized lechon skin and forkfuls of the meat, chugging them down with a bottle of cold San Miguel beer.

It was in October of 2008 when the world renowned chef/writer/ host Anthony Bourdain flew to Cebu for the first time to shoot part of an episode for his program “No Reservations, Philippines.”

This episode was to feature food native to our country, and lechon in Cebu was in the agenda. Playing host to his shoot in his Cebu was retired financial guru-turned-blogger Joel Binamira, whose experiments on Cebu lechon were featured in his blog Market Manila, and was taken notice of
by the show’s production team and Bourdain himself.

When first contacted if the show could feature his lechons, Joel replied that he was not a lechon expert nor a chef, and that he would happily connect them to old-time lechon purveyors in Cebu who have been in this business for decades. But they wanted to taste and feature the roast pigs he experimented on and blogged about, so how could a food blogger say no to a revered TV personality and CNN host?

The nasty rains the night before the TV shoot gave way to a brilliant morning, a hot day the lechoneros hoped for, as a humid and wet weather can be unforgiving to lechon skin, and can turn it rubbery in the process.

They filmed a tour of the markets, discussions on Filipino food and its regional differences, and a meal of kinilaw na tangigue (freshly caught and sent from Bantayan Island), lechon sisig, pasayan, sinigang na lechon, budbud kabug and delicacies hand-carried from Bohol.

Highlight of the shoot were the lechons, one roasted with the classic smooth skin, and an “acupuntured” blistery other, comparisons that had heads nodding, lips smacking and cold SMB pale pilsen passed around. The lechon skin that tasted like candy was bathed in fresh buko juice before it was roasted, producing a sweetish, caramelized flavor. 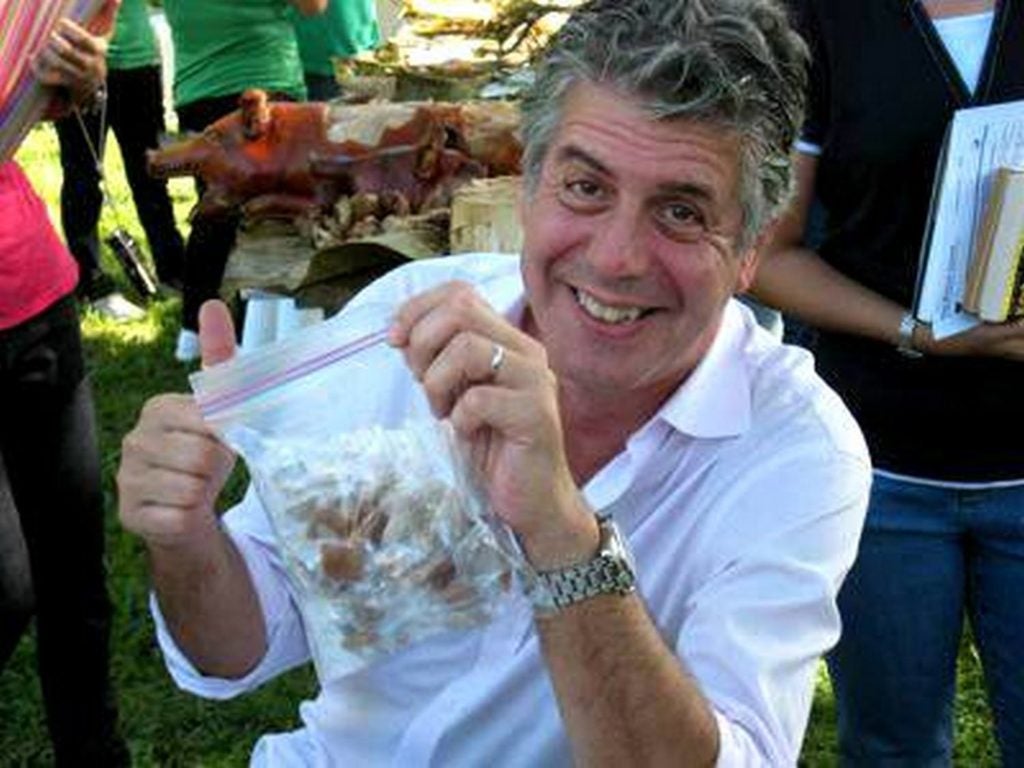 But the sweeter end to the day that launched Cebu lechon to its global fame was still to come.

Filming wrapped up, the entire crew enjoyed a breezy, leisurely meal under the shade of a giant kapok tree and Anthony graciously signed autographs and posed for photos with Joel’s staff, who were giddily thrilled to have cooked for him. Then he signed his “No Reservations” book that Joel asked to be autographed.

He drew a kitchen knife (he’s a doodler and makes caricatures!), then wrote:

“To Joel, Best Pig…Ever! Many Thanks!”
– Anthony Bourdain

The quote that launched a thousand pigs…

The “No Reservations, Philippines ” episode was shown a few months later, in February 2009, globally viewed by millions through cable TV. Joel featured the shoot in a series of blogs in Market Manila, where his readers asked that they be given a chance to buy the lechon that Bourdain had in Cebu.

It wasn’t for sale because he was not interested in going into a lechon business. He had a real estate business in Cebu and Bohol to attend to,
coming from a Cebuano/ Boholano bloodline of the Patalinghug, Veloso and Abueva.

Joel later changed his mind when the requests to buy his lechon grew numerous to be ignored.

The same real estate staff who helped organize the shoot were the same ones who manned the first stall at a weekend market in Banilad Town Center
in October 2009. They were told that if they sold the lechon, all proceeds would go to them. The amateur “businessmen” comprised of staff handling HR, accounting, admin, a utility staff, and driver, only cooked one lechon, fearing they had to buy it for themselves if it didn’t sell.

It ran out in 15 minutes, and the “Ingon bitaw ko nimo!

(I told you so!)” banter among them ensued.

The small stall bore the name Zubuchon, derived from the old name of Cebu in Pigafetta’s map, and from the word “lechon.”

It also had the “Best Pig…Ever!” sticker on the glass pane after Joel emailed Bourdain’s team to ask him if Joel could use this quote.

He was expecting to be declined, but Anthony said yes, to go ahead and use it because the lechon he had here was indeed the best roast pig he had eaten in all his travels around the world. Cebu now had its claim to roast pig fame.

From lechons at a weekend market stall and whole lechon orders through phone, Zubuchon had an opportunity to sell fresh and frozen lechons by the kilo at the Domestic Departure area at the Mactan airport.

Still, the clamor to eat Zubuchon in a proper restaurant setting needed to be fulfilled because lechon is best eaten hot, with rice, and spicy vinegar on the side. The first Zubuchon restaurant was built in 2011 in a nondescript commercial arcade in Mango Avenue.

In less than seven years, it has now grown to a chain of restaurants with 12 branches in Cebu and Mactan and three in Manila, with a bigger expansion in the pipeline for Manila. Thousands of lechons cooked—using the exact same recipe and procedure—that Bourdain tasted under that century-old kapok tree.

“If I’m an advocate for anything, it’s to move. As far as you can, as much as you can. Across the ocean, or simply across the river. The extent to which you can walk in someone else’s shoes or at least eat their food, it’s a plus for everybody.
Open your mind, get up off the couch, move.”
– Anthony Bourdain

Starting from a small crewof 12 in that tiny One Mango Avenue branch, Zubuchon now has almost 400 people in its employ.

Most of them are permanent employees, the only ones who aren’t are either probationary or trainees.

The utility staff who was part of the team that started it all is now head of construction projects, and the shy cook from the opening team is now head chef of multiple branches.

The opening team cashier is now an area manager.

They enjoy multiple benefits but the one thing they expressed worth having was the peace of mind knowing they have stable jobs. 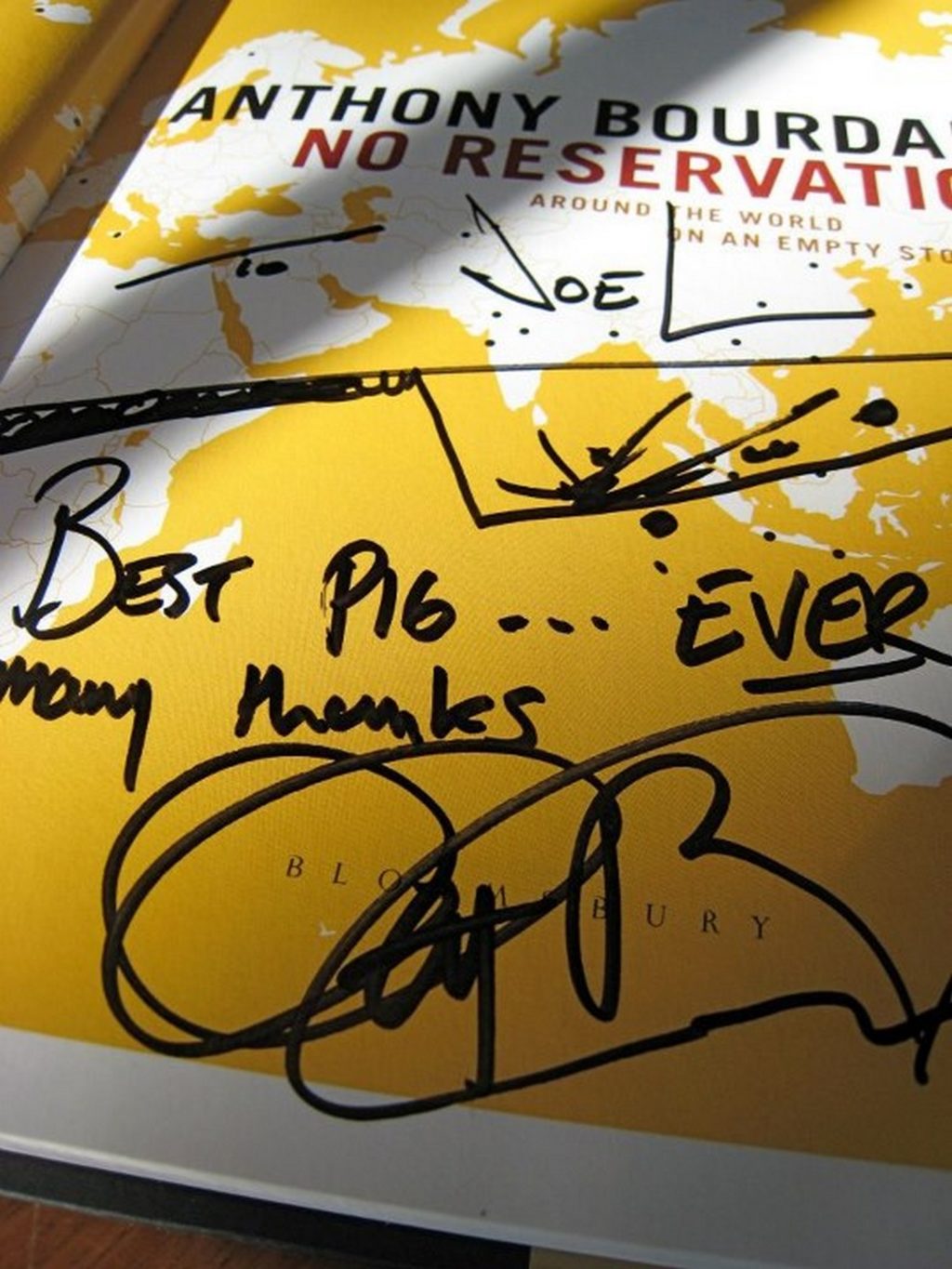 They know they have a chance of earning more, that they have this huge chance of promotion as the company keeps on growing.

They know they can continue keeping that roof over their heads, putting food on their tables, send their siblings or children to school, treat their families to the movie they wanted to see. All this is afforded because Anthony Bourdain placed Zubuchon and Cebu lechon in general, on the culinary map of the world.

In part because of him, tourists came to Cebu to eat lechon, but the ripple effect was bigger than just buying a plate of roast pork.

More lecho purveyors opened restaurants and stalls, more jobs were created, more produce were bought, diners had options of eating lechon outside of their homes.

Cebu has benefited a lot from that simple quote that he made and from professing it twice (in 2016 and 2017) that it still was the best one he ever had.

“I had really fond memories of the last time I had lechon in the Philippines. In fact, not to kiss your ass, but it is the finest pig I’ve ever had.”
– Anthony Bourdain, 2016 – “Parts Unknown” episode – Manila

“My first truly transcendent great whole roasted pig, the best lechon I ever had in my life was that time in Cebu.”
– Anthony Bourdain, June 2017

“As you move through this life and this world, you change things slightly, you leave marks behind, however small. And in return, life—and travel—leaves marks on you. Most of the time, those marks—on your body or on your heart—are beautiful.
Often, though, they hurt.”
– Anthony Bourdain on life

If there is one thing that Chef Anthony Bourdain’s influence has left indelible is the difference he made in our lives. He may not have known of
us, but we benefited from who he was, from his rock-star-of-the-culinary-world status.

We worked very hard to get to where we are now, but he was the spark that started it all. Bourdain left a mark, a big one, and a change not in the least slightly.

His passing is a shock, a big loss and a tragedy. As Joel succinctly puts it:

“May you rest in peace, Tony. One day with you helped to alter the course of my life and it has provided gainful employment for hundred of folks at Zubuchon as well as shining a global spotlight on Filipino food. We are all so saddened by your passing and so grateful to have crossed paths… Salamat.”