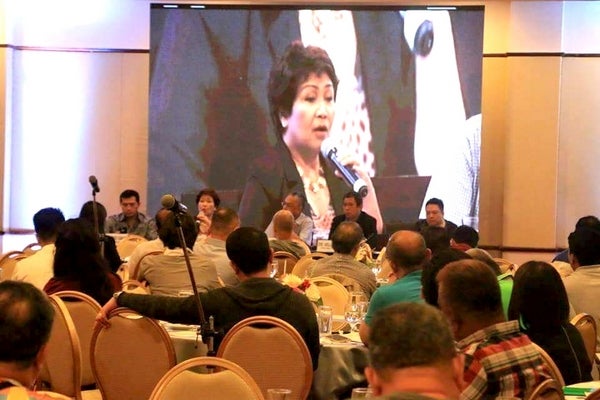 AROUND 250 businessmen, government representatives and other stakeholders were gathered at the Waterfront Mactan Hotel and Casino last Thursday for the Lapu-Lapu City Shoreline Summit.

The assembly was initiated by Lapu-Lapu City Mayor Paz Radaza to address recent findings of the Department of Environment and Natural Resources (DENR) and the Environmental Management Bureau (EMB) on the e-coli contamination and overcrowding of Mactan Island’s coastal areas.

“Let us not wait for the situation to be like Boracay. Let’s all be concerned,” said Radaza in Cebuano as she called for the protection of Mactan’s coastal environment and its underwater resources.

In a speech, Dino described the event as the most significant gathering of environmental and tourism stakeholders to address a common concern that will benefit the general welfare of the public.

“We are here not to point fingers or to find out who did what, but to arrive at an equitable solution before everything gets out of control,” said Dino.

He pointed out that Mactan Island is one of the jewels of the country’s tourism industry.

“We cannot afford for it to follow the fate of Boracay Island,” he said.

He noted that President Rodrigo Duterte was propelled to the Presidency on a platform of “CHANGE” that the people were all clamoring for.

“I don’t think anyone of you here can doubt the President’s political will to implement change,” said Dino.

But the President, he added, cannot do it alone.

Boracay Island was shut down for 6 months by the President since April 26, 2018 to give way to a rehabilitation program and a massive cleanup to save the island.

“We don’t want to see the day when the President will order the closure of our tourism industry in Mactan Island for rehabilitation. Let it be our initiative to self-rehabilitate to protect our investment and the entire industry. Let this be our social responsibility of restoring the environment,” said Dino.

Dino pointed out that many easement violations in Mactan were in “plain sight”.

An initial list from DENR-7 showed that 76 establishments had easement violations in Mactan Island. The most common of which were seawalls, dikes, fences, buildings, restaurants,swimming pools, causeways, ripraps, cottages,viewing decks,guard outposts, man-made islets,and a pier.

DENR also noted the construction of houses by informal settlers and even a subdivision by a developer.

The Water Code of the Philippines mandates a 3-three-meter easement from the shoreline for highly urbanized cities.

The law states: “No person shall be allowed to stay in this zone longer than what is necessary for recreation, navigation, flotage, fishing or salvage or to build structures of any kind.”

“Fix your water treatment facilities and discharge only clean water for the safety of the public and our tourists. Let’s agree to address these violations of easement and follow environmental laws ourselves the soonest possible time.” Dino said.

Tourism stakeholders, he said, should organize an inter-agency technical working group to oversee the implementation of this self-rehabilitation and form a multi-sectoral compliance monitoring team to see to it that the implementation is according to plan.

Read Next
How to become a top developer