How to become a top developer 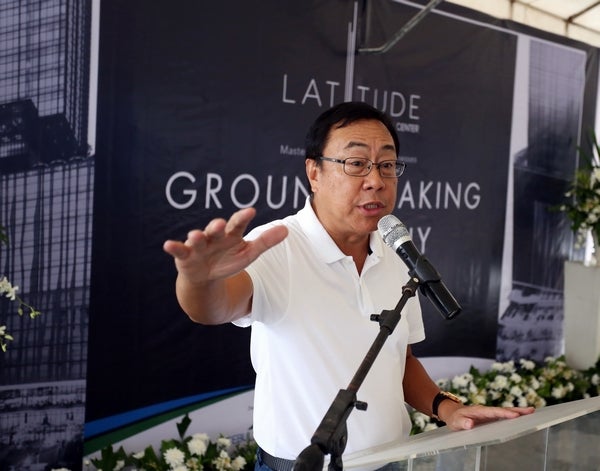 Jose Soberano III, Cebu Landmasters Inc. president and CEO, gives his message during the groundbreaking in June 2017 of Latitude Corporate Center building, one of the vertical projects of the firm in Cebu. CDN FILE PHOTO

Diversifying into different property sectors and expanding portfolios are helping local developers compete with bigger national players in the industry.

Such were the key ingredients that helped Cebu Landmasters Inc. (CLI) bag another award as one of the country’s top ten developers, and the only one from Cebu.

The listed developer was awarded by the BCI Asia Awards at The Shangri-La at the Fort last Friday, June 8.

“We are the first company outside of the national players to get the award. It’s because of the quality of the projects we have. It is also a recognition for how much we have impacted the industry in the Visayas and Mindanao,” said CLI President and CEO Jose Soberano III.

Property management and research firm Colliers International Philippines lauded how the firm was able to reach the same stature as other giant names in the country.

Research Manager Joey Bondoc highlighted the need for developers to not just stick with one product in order to get recognized.

“From horizontal housing, Cebu Landmasters has diversified into vertical or condominium projects, office towers, hotels, and even mixed-use estates.

It is bringing a foreign brand into Cebu hospitality and has been very aggressive in capturing opportunities in major growth areas in Visayas and Mindanao,” he told Cebu Daily News.

The Visayas and Mindanao regions are major beneficiaries of the Duterte administration’s Build, Build, Build program.

This infrastructure push by the government is seen as an opportunity for local developers to take advantage of, Bondoc said.

The BCI Media Group, established in 1998, is a leading provider of building and construction information across the Asia Pacific with 20 offices across nine countries and reporting on construction projects across 13 countries.

Based on their website, the BCI Asia Top Ten Awards has grown over the years as one of the highly coveted architectural awards in Asia. It is an award that recognizes the ten leading design and development enterprises that have made the greatest contribution to the industry.

Soberano said they were “happy and honored” to be included in the awardees for this year.

Soberano and his son Jose Franco Soberano, CLI’s executive vice president and chief operating officer, received the award, while other members of the family were also present during the event.

One of the criteria for the award is for property developers to have the greatest aggregate value of projects under construction during the last full calendar year weighted by the extent of their sustainability efforts.

The BCI Asia Awards is now in its 14th year. Aside from the Philippines, it is also held in other Asian countries like Hong Kong, Indonesia, Malaysia, Singapore, Thailand, and Vietnam.

For the younger Soberano, he said they had been hoping to bag the award for several years already.

“We are able to construct more projects because we are able to sell them. And that shows the confidence of our buyers. Our goal is to remain in this top ten developers (list) for a long time,” Jose Franco Soberano said.

Another factor for their winning the award, he said was the company’s move to go public last year. With the capital they had raised, he said, they were able to construct more projects.

CLI currently has projects in six areas including Cebu, Cagayan de Oro, Davao, Bacolod, Dumaguete, and Iloilo. Soon, they will also be pursuing developments in Bohol especially with the opening of the Panglao International Airport in the next quarter.

The company has also recently announced that it had set aside P8 billion this year as capital expenditures to pursue at least 20 projects in the Visayas and Mindanao.

When CLI started in 2013, the company was focused on horizontal housing projects. They expanded into condominiums in 2010 and office spaces in 2013.