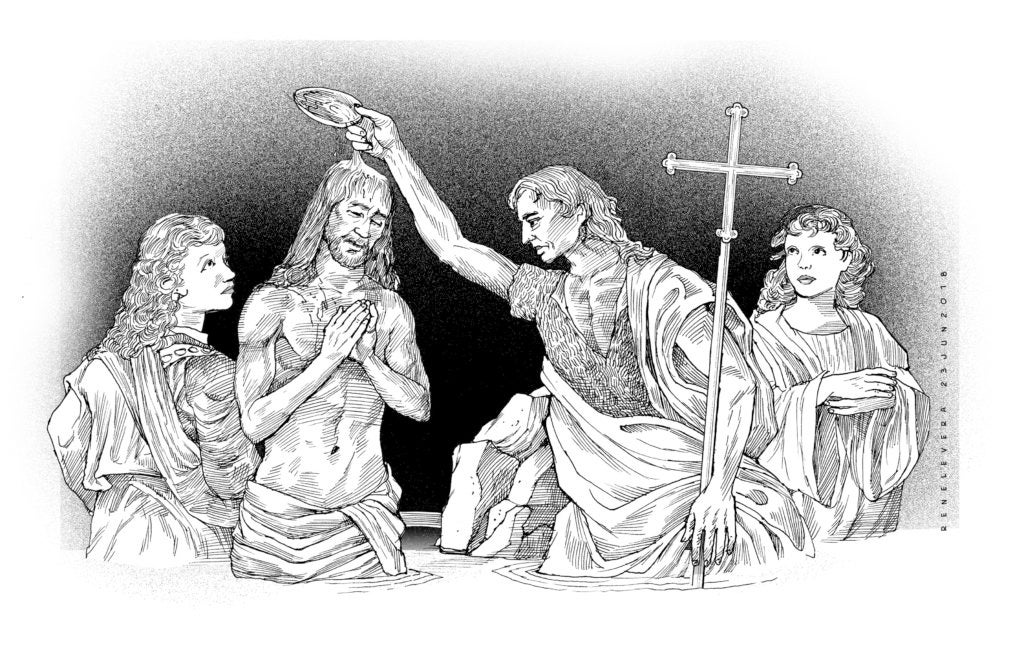 Perhaps Verrocchio’s “The Baptism of Christ” gives us a depiction of John the Baptist that most closely resembles the description of him in the Gospels.

Matthew writes that John wore clothing of camel’s hair and ate locusts and wild honey. Jesus gave this picture of John to the latter’s disciples, “What did you go out to the desert to see? A reed swayed by the wind? Then what did you go out to see? Someone dressed in fine clothing? Those who wear fine clothing are in royal palaces. Then why did you go out? To see a prophet? Yes, I tell you, and more than a prophet. This is the one about whom it is written: ‘Behold, I am sending my messenger ahead of you; he will prepare your way before you.’”

John had the same age as Jesus.

Hence, Verrocchio correctly presents him as a young man, who has the gauntness and intensity that we would expect from someone who lived in the wilderness.

Actually, the disciples of John had come to ask Jesus if he were the Messiah, the one who was to come, a question that seemingly came from John, who in fact knew who Jesus was and had most probably sent his disciples so that Jesus himself could confirm this to John’s disciples.

And so Jesus said in reply, “Go and tell John what you hear and see: the blind regain their sight, the lame walk, lepers are cleansed, the deaf hear, the dead are raised, and the poor have the good news proclaimed to them.”

In a poem, Thomas Merton addresses John the Baptist:

St. John, strong Baptist,
Angel before the face of the Messiah
Desert-dweller, knowing the solitudes that lie
Beyond anxiety and doubt,
Eagle whose flight is higher than our atmosphere
Of hesitation and surmise,
You are the first Cistercian and the greatest Trappist:
Never abandon us, your few but faithful children,
For we remember your amazing life,
Where you laid down for us the form and pattern of
Our love for Christ,
Being so close to Him you were His twin.
Oh buy us, by your intercession, in your mighty heaven,
Not your great name, St. John, or ministry,
But oh, your solitude and death:
And most of all, gain us your great command of graces,
Making our poor hands also fountains full of life and wonder
Spending, in endless rivers, to the universe,
Christ, in secret, and His Father, and His sanctifying Spirit.

TAGS: about, All, John