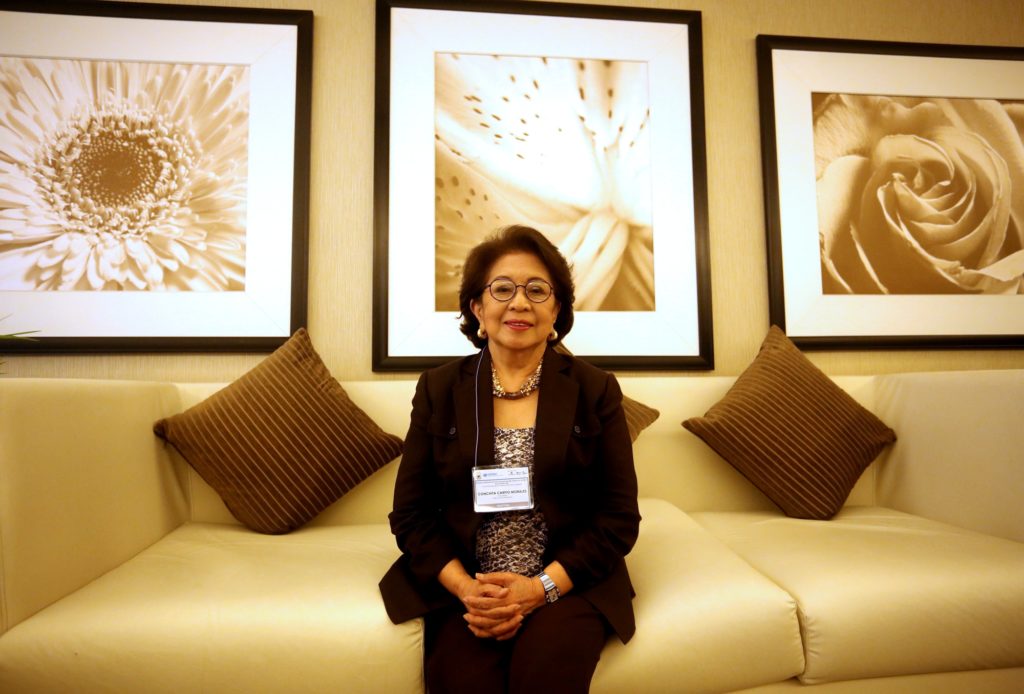 WHEN the history of the Philippines within last couple of decades will have been written, the name Conchita Claudio Carpio-Morales will stand out.

In fact, her name should be found in the histories of various government agencies from 1971, when she served as special assistant to Justice Secretary Vicente Abad Santos.
Outgoing Ombudsman of the

Republic of the Philippines and therefore the nation’s chief graft-buster, Ombudsman Chit, as she is known to close friends, will retire in July, capping five decades—alongside seven of the country’s Presidents—of stellar public service.

At the ultimate stage of her civil service career, we have seen mainly two sides to Ombudsman Chit—the consummate terror of wayward officials or the inspiring object of acclaim as in the 2016 Ramon Magsaysay Award for moral courage and commitment to justice that promoted the highest ethical standards in public service.

Where lies the fire to her flame? What is behind her steely resolve for justice? Where will someone steeped all her life in public work turn when the work is done? On the sidelines of a Cebu conference earlier this month about conflicts of interest, Play! had the rare honor of probing the Ombudsman to find some answers. (JAB)

You will be retiring shortly.
That is correct.

What is next for Ma’am Conchita Carpio- Morales?
I will not be politically active. Politics is not for me. I am not cut out for politics. That’s one thing that is sure.

So will the next thing be time with family?
Yes. Whatever lack of time for the family I encountered, I should be able to compensate for it.

Turning to your office, do you have a picture of an ideal successor?
No idea. There are eight applicants, I think, and it is up to the Judicial and Bar Council to determine who among them will be nominated to the President.

Do you have a word of advice for whosoever may succeed you?
I would like whoever will be appointed to carry out the reforms that I had instituted, but it is up to them, actually. But they should not buckle down under pressure. They should remain independent because it is useless being an Ombdusman if you heed pressures from outside. You should never heed extra-legal factors in
determining whether a case should go to court or not, in determining whether a person should be faulted or not.

You mentioned reforms in your office. What was the most important one among those you instituted?
The most important reform that I think I instituted was for people to craft decisions that are lucid, concise, which can be understood by laymen, because if your decisions are lucid, people can understand how you arrived at them and how fair it was or how biased it was.

Was there a difference between being an associate justice of the Supreme Court and being the Ombudsman?
In terms of volume of work, definitely. The work of an Ombudsman is so loaded that—as I have been saying—you need to be a masochist to enjoy doing this work because there is simply a lot of work. As I have earlier said, your work starts at sunrise and it ends at sunset, but still you cannot finish it.

As some of your decisions have not been enforced, do you think our system is flawed?
I think there is no flaw in the system. There might be some flaws, but certainly not in the system. We have good laws but [implementation is about] the will to implement.

How has it been— dealing with a tough Chief Executive in office?
Oh, it has been a challenge. But I would like to believe that I never buckled down to any insinuations, to anydirect or indirect instructions that have surfaced. I know that if there were any, I glossed over them.

Can the people really look forward to decisions being enforced against alter egos of the President?
It is like this. We monitor our cases that we file in court. We also monitor decisions that we promulgate in administrative cases. Now, if in monitoring, we feel that the decisions have not been implemented, we do as much as we can [to prompt implementation] but then again it is no longer within our jurisdiction to see to it that
implementation should be carried out if there are some factors determinant of why the decisions, orders, or issuances have not been carried out. But we see to it that if possible all our issuances are carried out.

Do you feel you have done better than your predecessors?

(Laughs). Comparisons are odious. But I would like to believe that I have done my best, I have done what is expected of me, and that in doing so I never acted out of bad faith.

Is there something you will miss about being Ombudsman?
Being cranky. (Laughs).

What happens when you get cranky?
Well, I am a Gemini. I have mercurial moods. My staff knows that. When I am disappointed with something, they know that I can blow my top. But in an hour or
two, I can be back to normal in the sense that I can be at peace with myself, and if I hurt someone, I apologize, not necessarily saying “I am sorry,” but in some other ways, in some other gestures.

Do you have morning or evening rituals?
When I wake up very early, I look at my e-mail, I look at the internet, I check the news so that by the time I reach the office, I just gloss over the newspapers because I have already gone through the news via the internet.

What are the first things will do in retirement?
I would like to travel, and in fact I have already booked myself for travel to a certain country in Europe after—of course—I fix my things because up to now, my records, my things, my communications, which come from as early as my Department of Justice days are still in boxes and it will take some time before I can organize them. I will certainly join some clubs like a bonsai club. (Laughs). Maybe it is time for me to smell the flowers so to speak because I have been in the government for decades and maybe I need a fresh outlook, a fresh environment.  Of course, I will have more time to devote to my two grandchildren.

Apart from smelling the flowers, would you engage in other hobbies?
I would probably learn to play the piano.

Are there musicians in the family?
No, but all of us girls—I have two sisters—we studied piano in Laoag. You know, Paoay is about 19 kilometers from Laoag, and every Saturday, we would go to Laoag to
take piano lessons, and we had a very good professor, and we had yearly recitals.  Unfortunately, I have not had practice for years on end, so I will have to relearn to play the piano.

Is there any piece you would like to master?
I would like to study my favorite pieces: “The Glowworm,” “Arabesque,” “Liebesträum,” and other classical pieces.

What do you do to unwind?
I listen to music.

Do you listen to music at the office?
Unfortunately, every minute in the office is vital for me to decide on cases, to go over certain matters that eat up most of my time.

Is there room for error among your workmates?
Of course, no one is infallible. We commit errors, so I still give them the benefit of the doubt, but whenthey do commit errors—and I myself commit errors—we rectify them for as long as they can still be rectified.

What are your sources of strength?
I think I am strong myself. I believe that whatever I do, I should do it for the sake of the country, for the sake of transparency, accountability and  all that, so I see to it that I should be strong because if I showed that I am weak then probably there will be a case of a domino effect—my staff will be weak, too. But if I show them that I am strong then it is infectious.

What would you tell anyone who aspires to work at the Office of the Ombudsman or in law?
Most of my staff toe the line so insofar as they are concerned I ask them to maintain the same dedication that they gave me to the incoming Ombudsman.

Any message for Filipinos in general in these turbulent, troubled times?
Those are your words. I ask them to be more vigilant, not to be cowed by fear, to be more proactive, to be more open, to be more critical if they believe that there is room for criticism, because if they are fearful, if they are overcome by fear, nothing will happen.

One of your assistant special prosecutors, Madonna Joy Ednaco-Tayag was recently killed. Any thought on this?
I felt so sad. How sad. For a while, I thought this had a bearing on the cases she has been handling, but it has surfaced that it was a simple case of robbery. I am putting all our prosecutors and all our workers for that matter on notice to be more careful, to avoid places that could be fertile ground for the commission of crimes. I directed through the media affairs office the assistant special prosecutor to see to it that there be a thorough investigation, I said there should be no stone left unturned, and in the latest news the malefactor has been arrested and I am happy about it. I would like to convey my condolences to the family of prosecutor Tanyag. My thoughts and my prayers are with them.