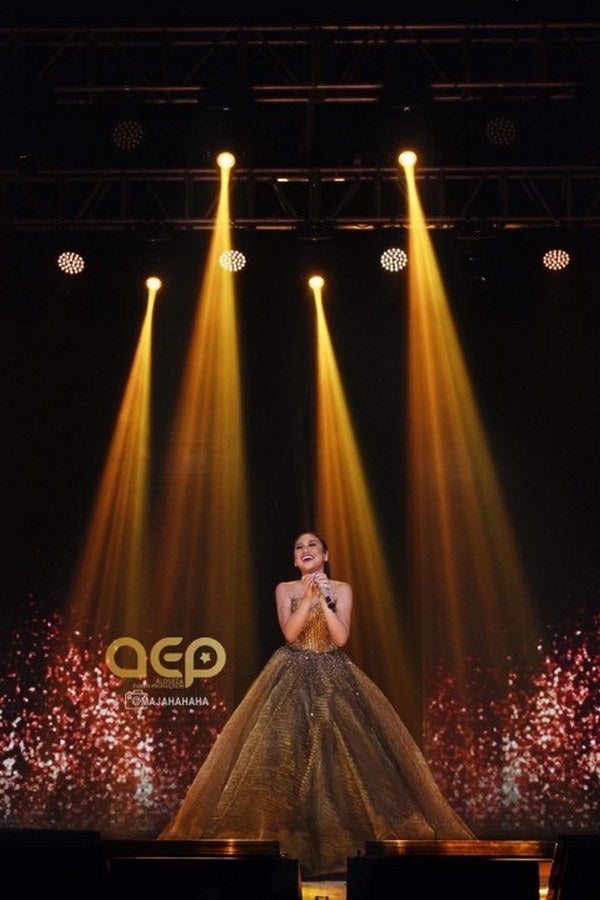 Cebuana singer Morissette Amon gives her all in her first major concert in Cebu.

A teary-eyed Morissette Amon told the audience in one of her numbers during her homecoming concert “Morissette is Made” held Saturday night at the Pacific Grand Ballroom of the Waterfront Hotel Cebu City and Casino.

Just like the February 20 concert at the Araneta Coliseum, it was a sold-out show.

The hometown crowd made sure they let the young singer feel their love, roaring with enthusiastic applause at each song, with glow sticks lighting up the venue.

“I am so happy to be home,” Morissette declared, overwhelmed by the reception.

It was her first major concert in Cebu since making it big in Manila and relocating there with her family to pursue her dreams.

The 22-year-old Cebuana singer opened her concert with an upbeat medley of “I’m a Survivor” (Destiny’s Child), “Burnin’ Up” (Jessie J), and “Cebuana” (Karencitta).

She then introduced herself to the crowd.

Just like other enthusiasts, she joined singing contests and performed in malls, fiestas, and for radio stations.

In one of the videos shown during the concert, Amon narrated that she comes from a musically inclined family from Minglanilla, Cebu.

Her parents, Amay and Analie found out about her singing talent when one day, they left her inside a room and heard her sing.

She grabbed the microphone and sang “You Are My Song,” a Regine Velasquez original. She said her father was her first vocal coach since he was part of a band that performed rock songs.

It was during this part of the concert when Amon showed her versatility by performing a string of rock songs: “Dream On” (Aerosmith), “Sweet Child O’ Mine” (Guns N’ Roses), and “Living on a Prayer” (Bon Jovi).

Now known for her ballads and pop songs, she then performed the official theme songs she has interpreted for some of ABS-CBN’s teleseryes: “Kapag Ako’y Nagmahal” (Flordeliza), “Ano’ng Nangyari sa Ating Dalawa” (Two Wives), “Hanggang” (The Better Half), and “Ikaw Ay Ako” (Doble Kara).

Long before becoming the voice behind some of ABS-CBN’s teleserye theme songs and racking up millions of views on YouTube for her performances, Amon joined TV5’s “Talentadong Pinoy” in 2010. Unfortunately, she did not win.

She joined another talent search in TV5 called “Star Factor” in 2012 where fellow Cebuana Eula Caballero was hailed as the grand winner.

In 2013, Amon joined the first season of “The Voice of the Philippines” and became part of Team Sarah.

But victory was still elusive.

Mitoy Yonting of Team Lea was named the grand winner.

But it was her stint with “The Voice of the Philippines,” that paved the way for Amon to become a regular performer in ABS-CBN’s Sunday show, “ASAP.”

She also had the chance to represent the country at the Asia Song Festival 2017 held in South Korea.

Her biggest break so far was her first solo concert held at the Araneta Coliseum last February 20. Referring to her concert’s title, she said in one of the videos: “I don’t feel really like made na jud ko. I still have a long way to go.”

She also mentioned that her family made a lot of sacrifices for her career.

Amon thanked her family and supporters who have been with her in her journey.

“Each and everyone of you made me,” she said.

The power belter has indeed not forgotten where she came from.

“The best thing about Morissette is that aside from her talent and her looks, she is really a good kid at heart,” her manager, David Cosico told Cebu Daily News the night before the concert.

At one point during the show, Amon took a pause before delivering her signature whistle. But instead of letting the temporary glitch faze her, she quickly recovered then gamely declared: “Live!” This was met by the audience with resounding applause.

Amon ended her concert with a powerful performance of her favorite contest piece, “And I Am Telling You, I’m Not Going” from the Broadway musical, “Dreamgirls.”

“Morissette is Made” is directed by Paolo Valenciano with Adonis Tabanda of the 3rd Avenue band as musical director. It is produced by Aldueza Events Production.

Amon is set to do a series of concerts abroad before bringing “Morissette is Made” to SMXConvention Center in Davao City on September 2.