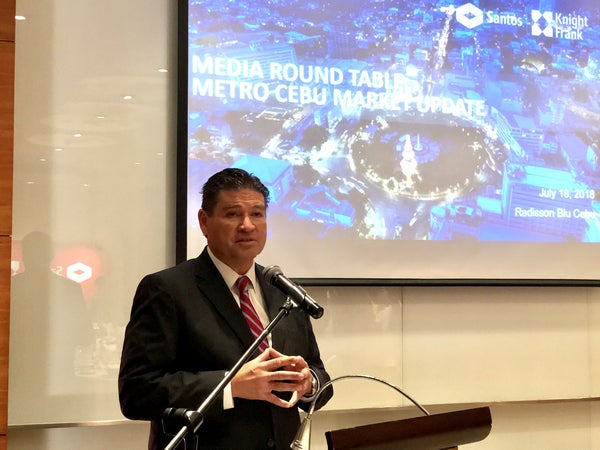 Santos Knight Frank’s experts led by its Chairman and CEO Rick Santos are optimistic about investors and investment opportunities in Cebu during a meet with the local media on Wednesday.

There may be uncertainties on whether incentives for companies, especially those in economic zones, will be retained or not with the proposed second tax reform package, but real estate experts remain optimistic in Cebu’s growth.

Experts from the global real estate services provider Santos Knight Frank said they believed that investors would continue to see expansion opportunities in Cebu and the rest of the country in the coming months and years.

“Investors will not come for the tax incentives. It’s not typically a deal breaker. You don’t enter a market solely relying on tax incentives. Their priority is the growth opportunity. The incentives are just icing on the cake,” said Kash Salvador, associate director for investments and capital markets of Santos Knight Frank.

Salvador also cited the continued economic growth of the Philippines compared to other countries in Southeast Asia as a come-on for international companies to continue expanding in the country.

In 2017, the Philippines remained among the fastest growing of the emerging economies in the region with an average economic growth of 6.7 percent for the whole year in 2017.

“The main concern for them is how much can I grow? With more than 6 percent GDP growth, we’ re doing a lot better compared to other ASEAN countries. They can take more advantage of us, than if they expand in other countries,” Salvador added.

The Tax Reform for Acceleration and Inclusion (TRAIN) 2 is currently being deliberated by Congress.

TRAIN 2 seeks to “rationalize and modernize” the number of incentives being offered by government to companies to make it “more equitable and effective in creating jobs, industry development and attract more foreign direct investments and generate more revenues.”

The Philippine Economic Zone Authority (PEZA) currently grants a package of incentives to locators in PEZA-registered companies including an income tax holiday of a maximum of eight years and a perpetual 5 percent tax on gross income earned (GIE), zero value-added tax on local purchases, and up to 30 percent of local sales, among others.

On the other hand, TRAIN 2 aims to gradually reduce the corporate income tax (CIT) rate to no less than 25 percent from the current 30 percent which is one of the highest rates in Asia.

“The demographics is so strong. Opportunities abound, they’re immense. They’ll continue to grow because Cebu is a growth market,” he said during a media roundtable discussion last Wednesday afternoon.

He cited Cebu’s large pool of young talents that had the basic skills like speaking English which would be attractive for investors.

What Cebu needs to work on, he said, would be more on public infrastructure to support the continued growth of multi-national companies that had set-up shop in the province.

They cited several foreign companies that decided to choose Cebu as their headquarters, even foregoing Manila and other parts of the country like Lexmark and Amazon which
recently set up an office in Cebu.

But while there may be uncertainties with the incentives, PEZA Director General Charito Plaza earlier assured stakeholders of the local information technology and business process management (IT-BPM) sector that they would be fighting to retain these incentives.