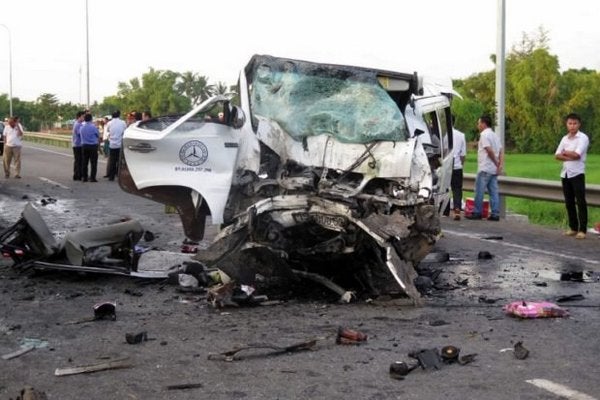 A van headed to a wedding party crashed in the early hours of the morning along a road in Quang Nam province on Monday. /AFP

Hanoi, Vietnam – Fourteen members of the same family were killed in a car crash in central Vietnam on Monday.

The fatalities were en route to a wedding party when their van hit a container truck, police said.

Road accidents are the leading cause of death in Vietnam, where traffic laws are loosely obeyed and road infrastructure is patchy.

The victims of Monday’s car crash in Quang Nam were members of an extended family, including the groom who died instantly. They were heading to the bride’s family home in a neighboring province, a police officer told AFP.

Their 16-seater van collided with a container truck at around 2:30 a.m., killing 13 people instantly. Another died later in the hospital.

“All (of the) victims’ bodies were brought back to their home for burial. We are treating some of the injured in a local hospital,” the policeman said, requesting anonymity because he was not authorized to speak to the press.

Local authorities said Monday they were investigating the cause of the deadly crash.

Around 8,200 people died in traffic accidents across Vietnam last year, down from about 8,600 the year before. Most of those killed were on motorbikes.

Vietnam’s densely packed cities like Hanoi and Ho Chi Minh are crowded with motorbikes and cars competing for space with pedestrians and street vendors.