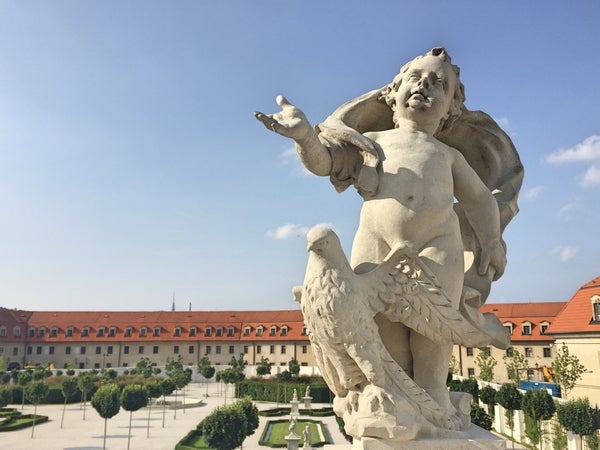 LIKE weaving a spell, music virtuoso Katica Illényi waved her hands to play the theremin and held in thrall the Old Town of Bratislava on the evening of June 8.

The theremin, she explained to the crowd, was invented in 1920 by Russian Leon Theremin.

It is controlled without physical contact, just hand gestures.

Its music is haunting and melancholic, almost preternatural. 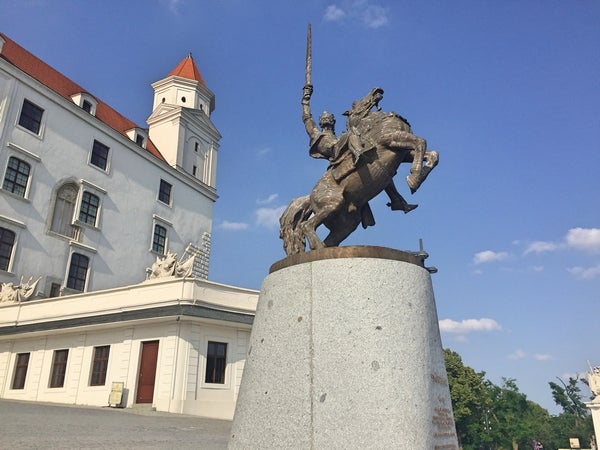 This statue of the great Moravian Empire King Svätopluk astride his horse fronts the huge Bratislava Castle.

The theremin is but one of the amazing repertoire of Illényi, a virtuoso violinist and singer. Many nights I’d be transfixed on my Illényi YouTube playlist.

I couldn’t believe I was now seeing her in person.

That I saw Illényi perform on the evening of June 8 can only be described by that overused cliche of the stars aligning. For me in Bratislava that day, however, the stars truly aligned.

By scheduling of Marlen, my wife, we were in Bratislava on June 8.

By happenstance, it was celebrating The Week of Hungarian Culture and had scheduled performances. Illényi , who is Hungarian, was set to perform on June 8. That’s just half of this wondrous serendipity.

We were going around the Old Town and decided to have lunch in Hviezdoslavovo Square just as an orchestra was rehearsing at the stage. I quickly finished my bowl of gulas to take videos, all the while telling myself that the lead violinist looked like Illényi.

I walked to our agreed meetup for the continuation of our exploration and was nearing the statue of Hans Christian Andersen when I heard it—the singular melancholic sound of a theremin playing “O Mio Babbino Caro.” It was then that I knew for sure it was Illényi.

I ran back, caught the end of her rehearsal, and learned that the concert was for 8 that night. 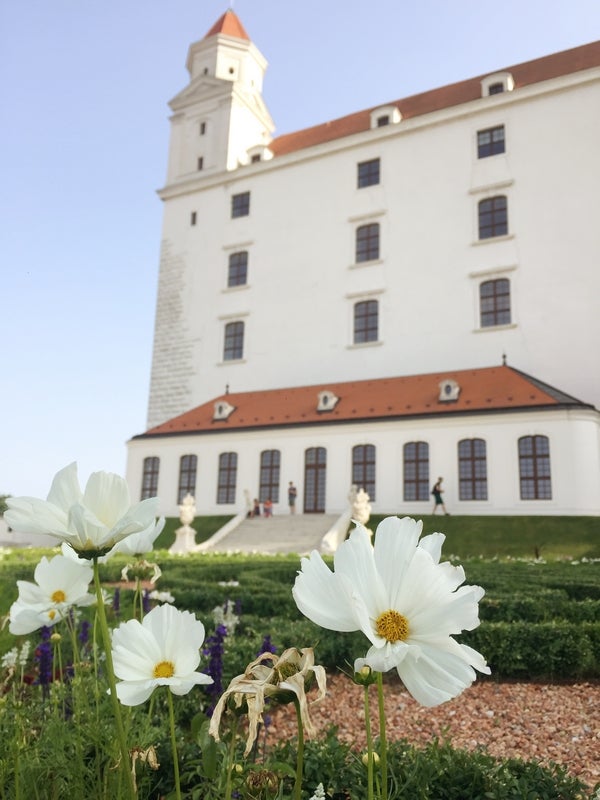 The Baroque Garden in Bratislava Castle. Although built in 2016, the tourism board said Queen Maria Theresa had one built during her reign in the 1700s.

We spent the afternoon going around the Old Town, the main draw of the capital of Slovakia.

All around the historic center were several statues that were a favorite of tourists.

Apart from Andersen, there was a Napoleonic soldier and Schone Naci, a local eccentric who was a fixture in the Old Town.

The most photographed, however, is Cumil, the statue of a sewer worker emerging from a manhole.

We visited St. Martin’s Cathedral, where Hungarian kings were crowned. Its 85-meter tower is topped with a 150-kilo golden replica of the Crown of St. Stephen or the Holy Crown of Hungary, worn by Hungarian rulers to mark the Divine Right of Kings over the land.

You can also find all over the Old Town brass plaques that mark the path taken by royals after the ceremony.

Also within the Old Town is Michael’s Gate, the only preserved gate from the four that used to stand.

At its base is the Zero Kilometer Plate listing distances from Bratislava to capitals all over the world.

Marlen was taking a photo of the plate when something we were repeatedly warned about happened: a pickpocket had her fingers inside her sling bag.

I shouted a warning and she just walked away, blending with the tourists.

But such a beautiful thief.

We then passed old town walls and went up beautiful winding cobbled roads on our way to the Bratislava Castle.

We passed a vantage point that offered one of the best views of the Most SNP or the UFO bridge over the Danube River, so called because the observation deck looks like a flying saucer.

Its size and stark whiteness is what defines Bratislava Castle. 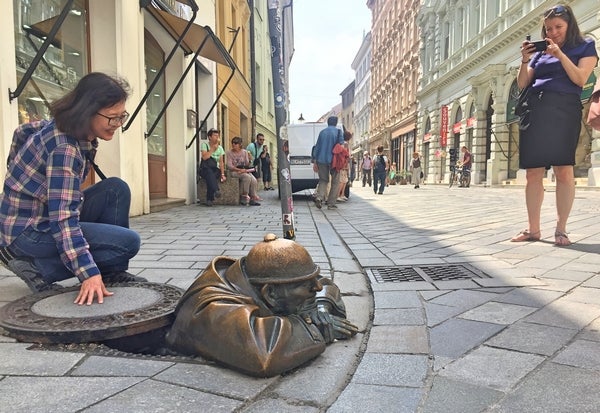 One of the statues in the Old Town is of Cumil, a sewer worker peeking out from a manhole. It’s a favorite among tourists.

We also visited the historic outpost of Devin Castle, which protected the Hungarian Kingdom’s western borders in the Middle Ages.

All you see are ruins—it was blown up during the 1809 siege of Bratislava by Napoleon.

Devin Castle is also near the Iron Curtain, the border between communist Eastern Europe and the West during the Cold War. Just outside the castle is a memorial to the “400 people shot dead during communist rule.”

The seclusion and silence of the place make the visit more poignant.

“The Iron Curtain used to stand here. It cannot be pulled away. It can only be cracked. Four hundred people sacrificed their lives while fighting for their rights,” said the marker installed in different languages.

As a tourist destination, culture, history, and music define Bratislava. It is a “City of Music” where such geniuses as Mozart, Beethoven, and Liszt performed.

On the night of June 8, however, it was all about Illényi. She played “Por Una Cabeza” on the violin, sang Edith Piaf, and conjured magic on the theremin with the haunting “Your Love” by Ennio Morricone.

I stood enchanted while taking videos of her entire concert.

Then she talked to me.

At the end of the show she thanked the crowd and, looking in my direction, said, “Please don’t upload the movies to the Internet.”