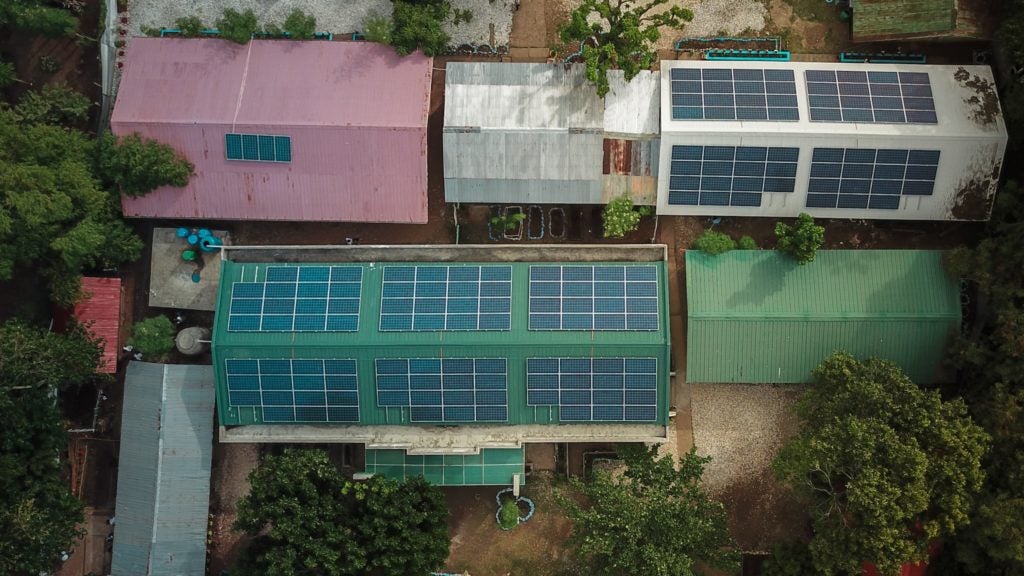 Vivant Foundation Inc. (VFI) officially turns over a 50-kWp (kilowatt peak) solar power system to Hilotongan Integrated School, an
institution located in an island barangay that can be reached at least six hours from Cebu City.

OFF GRID NO MORE

Before their boat could even dock on the shores of Barangay Hilotongan, Bantayan Island, already — students and teachers in pink, green, red and white uniforms were clapping and cheering for the team from Vivant Foundation, Inc. (VFI), a non-profit organization led by Executive Director Shem Garcia.

It was a festive day for the teachers, students and parents of Hilotongan Integrated School (HIS) as the Cebu-based foundation of Vivant Corporation officially turned over a 50-kWp (kilowatt peak) solar power system.

The new power system would allow the school to finally utilize two computer central processing units, 46 monitors in the High School computer laboratory and six Grade School computers.
It also ensured that the air-conditioning unit, electric fans, classroom lights and perimeter lights would work to create a conducive and safe learning environment for the teachers and students.
Standing with his fellow students was Edmar Orpeza, 15, who said that he felt special that people from the city made the effort to understand the needs of the island where he lives.

“Classes will continue even when it is raining and cloudy because we can just turn on the lights,” said Orpeza, a Grade 9 student who dreams of becoming a mechanical engineer.

His older siblings, who are in Grades 10 and 11, want to be a nurse and a teacher, respectively.

Before the solar power system was installed, the teachers had no choice but to dismiss classes early because the 20 classrooms were dark and both teachers and students could not see clearly.
Learning was also hampered by heat and humidity.

Established in 1935, the school has 734 students from Kindergarten to Grade 12.

Garcia said HIS was chosen as pilot beneficiary for VFI’s Project Liadlaw or the Off-Grid Solar Electrification Project because it has the biggest student population among un-energized islet schools in Cebu province.

Garcia said the four-year-old foundation aimed to find ways to help the community.

“When we went around the Philippines, we learned that education is the most important concern of many communities. The best way to help people is to uplift themselves so we extend our help starting off with Hilotongan,” he said.

The solar power system includes inverters and batteries that ensure that lighting and appliances continue to function even when there’s cloud cover and that perimeter lights remain on at night.

The foundation also upgraded the school’s electrical wiring system and donated LED lights and electric fans for the 20 classrooms.

Reaching the island-village of Hilotongan is a tiring journey that runs for six long hours from Cebu City when the weather is sunny.

The trip could take longer during rainy and windy days.

The journey begins with a three to four-hour drive from Cebu City to Hagnaya in San Remigio town, located 110 kilometers north of the city center.

From Hagnaya, another 1.5-hour boat ride will take travelers to the port of Santa Fe town in Bantayan Island.

A 30-minute land trip from Santa Fe leads to the Bantayan municipal wharf where pump boats take passengers to Hilotongan Island for another ride that runs for 45 minutes to an hour.

The boat fare is P20 for adults and P10 for children.

Barangay Councilor Martinita Paclibar said the island is about seven to eight hectares with a population of 3,000 to 4,000 individuals. There are 1,200 registered voters in the island-barangay.

James Lauron, a Grade 10 English teacher, told Cebu Daily News that the school also faces the problem of classroom shortage which has led him to hold classes on the school stage.

“The solar panel technology that the foundation provided meant a conducive learning environment for the students and comfortable teaching spaces for us, teachers,” said the 26-year-old Lauron who originally hails from Liloan town, mainland Cebu.

He noted that a school should be a place where children can dream to succeed and become somebody in society to be able to provide for their family and improve their living conditions.

Vivant Foundation is the corporate social responsibility arm of Vivant Corporation, a publicly-listed energy corporation operating in the Philippines with its headquarters in Cebu.

The foundation’s Project Liadlaw was named after Visayan mythology’s god of the sun.

With help from the Department of Education (DepEd) and the Technical Education and Skills Development Authority (TESDA), the project also integrated solar power into the Electrical Installation and Maintenance (EIM) technical-vocational curriculum of the Bantayan Senior High School (BSHS).

BSHS is now the first senior high school in the country to offer EIM-Solar.

“The maintenance of the HIS solar PV system will be part of the on-the-job training of BSHS EIM students, preparing them for a growing sector in the country’s energy market,” Garcia said.

To enable the teachers to effectively teach solar power installation and maintenance to their students, Vivant organized a TESDA-certified training for EIM instructors of BSHS and Mandaue City Comprehensive National High School which also received tech-voc teaching equipment and tools from the foundation.

With the solar technology providing 50kWp to HIS, the school has more than enough supply of electricity for their future load. The school’s present load is about 11.25kW.

Meantime, the foundation will work with the school and the community on how residents could utilize the excess power.

VFI has put in around P4.3 million for the HIS solar power system, P1 million for the EIM-Solar tech-voc equipment at BSHS, and another P200,000 for the teachers’ training.

“The foundation is geared towards supporting STEM (science, technology, engineering and mathematics) programs because we are lagging behind in this area. We felt that this is an area that we can work on,” said Garcia.

Garcia added that the project was in response to an appeal from DepEd for power companies to provide electricity to off-grid schools in the country.

Salustiano Jimenez, assistant regional director of DepEd Central Visayas, called on the students to take care of the gift that they received from VFI.

“Do not throw stones on the solar panels. Treat it very well because you are very blessed to be given this gift,” Jimenez said.