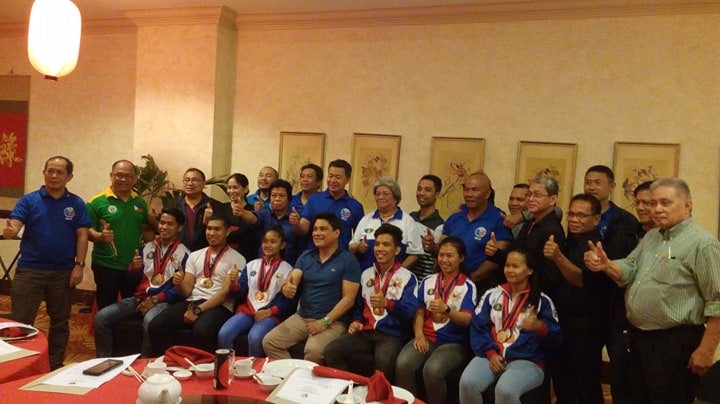 Pekaf officials headed by Senator Juan Miguel Zubiri with Cebuano medalists in the recent Wekaf World Championships gather for a group photo at the Waterfront Cebu City Hotel and Casino.

In fact, Zubiri, who is in Cebu for a meeting with Pekaf board members, said he will step down as president of Pekaf if the team will not deliver at least 15 gold medals and emerge overall champion in the biennial meet that the Philippines will be hosting.

“If we will not emerge as overall champion in arnis in the Sea Games, I will resign as the president of Pekaf,” Zubiri said during the board meeting yesterday at the Waterfront Cebu City Hotel and Casino.

“I am output oriented. I want to walk the talk. If I cannot deliver, I will resign as their chairman and president. That’s also putting pressure on them (Pekaf officers) that they have to deliver. All of them are the leaders of the biggest arnis clubs in the country. We are targeting 15 gold medals at least,” said Zubiri, the author of the Republic Act 9850 or the Arnis Law which declared the authentic Filipino martial arts as the Philippines national martial art and sport.

Arnis, which replaces pencak silat in next year’s Sea Games, has 20 events worth one gold medal each.

Team Philippines finished second overall in Wekaf world championships last July with a 39-24-32 (gold-silver-bronze) tally while the United States topped the competition with a 101-79-80 haul.

The gold medalists in the World Championships may don the colors of the Philippines in the Sea Games as they are already part of the national training pool for arnis.

To give them more exposure, Zubiri is planning to stage an Asian championships next year, where he will be inviting teams from China, Japan, Korea, and other Asian countries to compete.

The venue could either be in Cebu or in Manila.

Read Next
All set for IP Games in Ifugao