Poe: Xiamen Air should pay for damages for NAIA closure 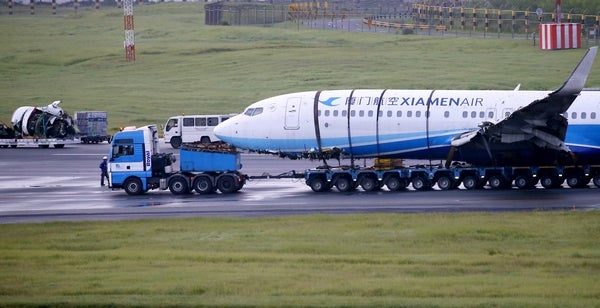 A damaged Xiamen Air, a Boeing passenger plane from China, is towed away from the scene more than 24-hours after it skidded off the runway while landing under a heavy downpour Saturday, Aug. 18, 2018, at the Ninoy Aquino International Airport. AP

Xiamen Air should pay for damages caused by the closure of the Ninoy Aquino International Airport’s (NAIA) runway after one of its passenger aircraft skidded off the runway last week and paralyzed operations for two days, Senator Grace Poe said.

“If they are at fault, they need to be able to compensate for all the losses, specifically financial losses, about 200 flights,” Poe said yesterday in an interview over ABS-CBN News Channel.

The senator, however, also cautioned that the government should not make any “arbitrary policies” considering that there are other international airlines waiting how the Philippines would respond to the incident.

“We cannot lay all the blame on an international airline because other airlines might be able to see this as our laying blame on others as supposed to actually rectifying the situation,” Poe noted.

Airport authorities had been criticized for the closure of the 60/24 runway after a Xiamen Air hard landed and skidded off the runway during a heavy downpour on Thursday evening.

The incident had forced the cancelation of hundreds of flights and affected thousands of passengers as authorities took 36 hours to remove the aircraft from NAIA’s runway.

According to Manila International Airport Authority (MIAA) General Manager Ed Monreal, Xiamen Airlines may have to pay at least P15 million for the equipment and manpower services used by MIAA to remove its aircraft.

Monreal said yesterday that the P15 million was just an initial cost and the agency still had “a lot of things to consider.”

“Right now, there’s only two aspects that we just had computed. I think in the range of P15M but there’s still a lot of cost,” Monreal said in an interview with ABS CBN News Channel.

Monreal said the P15 million only covers the manpower and the rental for the crane and other equipment used to haul Xiamen Air flight MF8667 off the runway.

Monreal said he already talked to Che Shanglun, chair of XiamenAir regarding the matter.

“I met with the Chairman of Xiamen Airways and they said that they will cooperate,” Monreal said.

Shanglun issued on Monday a public apology to passengers affected by the canceled flights due to the mishap.

Read Next
PH priest in Texas disappears amid molestation claims