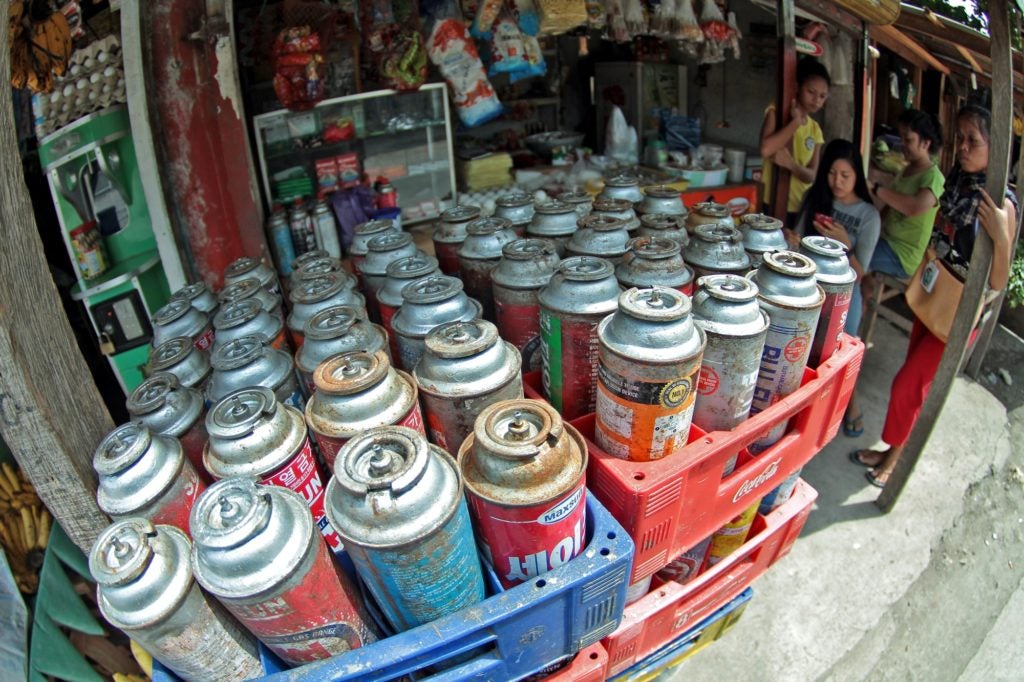 Despite the ban on LPG-filled butane cannisters, there are still small stores in Metro Cebu that sell these banned products.

For helping three butane vendors get out of detention, Cebu City Mayor Tomas Osmeña may find himself in trouble.

The top executive was accused by policemen of “unlawfully” taking into custody and releasing three suspects who were arrested for purportedly refilling butane canisters with liquefied petroleum gas (LPG) at the T. Padilla Public Market on Friday afternoon.

The five policemen who were on duty at that time were taken aback by Osmeña’s presence in the police station and were not able to stop the mayor from bringing the suspects with him.

“While at the office, Mayor Osmeña, after inquiring of the violation of the arrested persons, unlawfully told them to go home (before any clearance was made). He further said that he will be the one to take custody of the said persons,” said Lumancas in a report submitted to Senior Supt. Royina Garma, director of the Cebu City Police Office (CCPO).

“The mayor even stood on the main door of the station while watching the three suspects freely walked away. The three arrested persons immediately boarded a vehicle upon his instruction while he (Osmeña) boarded his own service vehicle and sped away,” he added.

The incident was caught by the closed-circuit television (CCTV) camera of the police station and recorded in the police blotter as a violation for “obstruction of apprehension and prosecution of criminal offenders committed by Mayor Osmeña.”

Supt. Carlito Apilat, chief of the Cebu City Intelligence Branch of the CCPO, said they are contemplating on filing charges against Osmeña.

“If we find out that the mayor indeed committed a violation, we will be filing a case against him,” he told Cebu Daily News.

Apilat, whose advice was sought by the policemen on duty at the Parian Police Station, said he instructed them not to allow Osmeña to take custody of the three suspects.

“But when I arrived in the area, Mayor Osmeña (and the suspects) was no longer there. Apparently, our policemen on duty were intimidated by the presence of the local chief executive,” he said.
“The mayor reportedly told the suspects to ‘go out,’ and there’s no one who could stop the mayor at that time,” he added.

CDN tried but failed to reach Garma through the phone on Saturday.

Ready to face them

Sought for comment, Osmeña admitted of taking the three detainees with him but said he did it for a reason.

“Of course, I was helping them. These are little people who are just trying to make a living of whatever they are selling. They were caught on a Friday and they’re going to be in jail the whole weekend (plus Monday, a holiday),” he told CDN over the phone.

“You know, I bend the law a little bit for poor people because of mercy. We’re talking about livelihood here. Whatever they are selling, I don’t care because we apprehend them every day through our Probe (Prevention, Restoration, Order, Beautification, Enhancement), but we don’t throw them in jail,” he added.

Osmeña clarified it was wrong for the police to say that he facilitated the release of three detainees, as the policemen on duty did not prevent him from bringing with him the butane vendors.

“Facilitate? That’s as if I’m facilitating smuggled goods such as shabu and other contraband. I just told them to go home. Ako na ang bahala (I’ll take care of them). I asked the policemen if it’s okay to put them under my custody, and they had no objections so I told them to go home,” he said.

Osmeña said he would be willing to face whatever charges the Cebu City police will file against him.

Osmeña, however, has a message to policemen.

“Instead of focusing on small violations, why not address the murders happening in the city now?” he said.

SPO2 Protacio Meredores, the desk officer on duty of the Parian Police Station when Osmeña arrived, said they were intimidated by the mayor’s presence.

“Tungod sa among kakulba, wala mi nabuhat. Mayor baya ang niatubang namo (We were so afraid that we were not able to do anything to stop him. After all, it was the mayor who talked to us),” he told CDN.

Supt. Artemio Ricabo, deputy director for administration of CCPO, said the mayor should have waited for the suspects to post bail so they could be legally released.

“With what he (Osmeña) did, he might be criticized by the public. He might get a negative image,” he said.

“He should have waited for the suspects to post bail. Anyway, the crime is a bailable offense,” he added.

Read Next
A life of music