A life of music 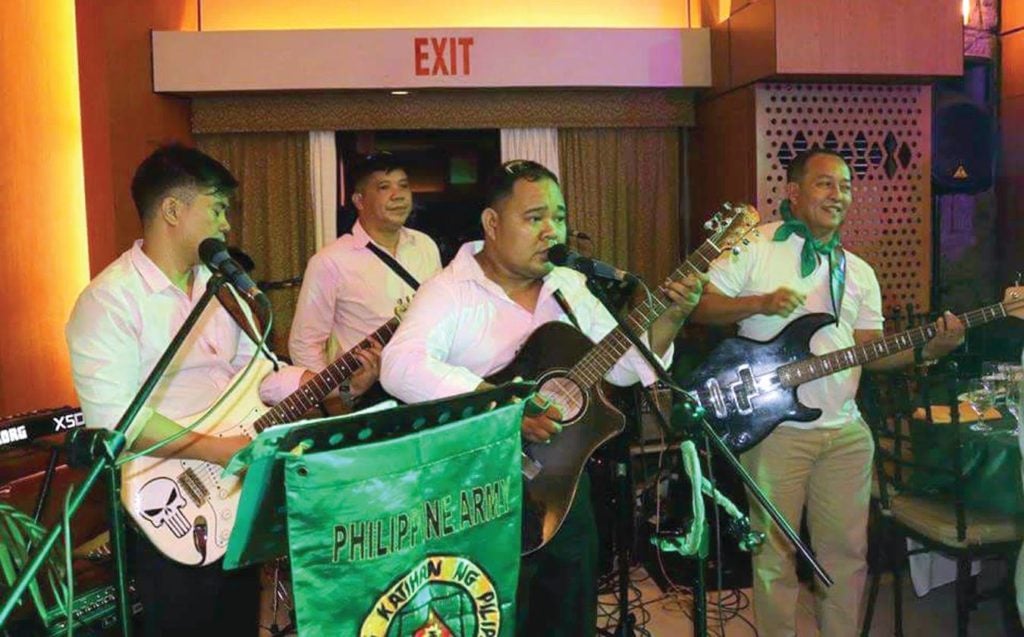 LTFRB-7 Director Eduardo “Ed” Montealto Jr. (with green scarf) plays the guitar in one of the events of Philippine Army before he retired in 2016. Montealto was a member of the PA’s Airborne unit.

What makes the world go round?

Montealto, a native of Davao City, said that music has been a vital part of his life for as far back as he could remember.

“When I was a child. I really enjoyed playing musical instruments and singing. I started being a musician way back in my high school years,” recalled the 57-year-old Montealto.

“My life had always revolved around music. When I was a student, I couldn’t study without music and even now, I would wake up if someone will turn off the music that I play before going to sleep,” he said.

An only child, Montealto said that his love for music stemmed from his desire to gain friends.

“Other kids in our place had brothers and sisters to play with. I had none, that is why I wanted to play music to meet people and have friends,” he said.

At 17, Montealto was sent by his parents to Cebu City to study for college.

He finished Mechanical Engineering at the Cebu Institute of Technology (CIT) in 1982 and earned his license on the same year.

“While I was studying, I also sang in a juice bar in Mango Avenue. That was the late 70’s and drugs was not a problem back then,” he said.

“I only sing to enjoy my passion and meet people because I love making friends with them,” Montealto told Cebu Daily News.

According to Montealto, singing allowed him to meet people from all walks of life, “students, drivers, and even businessmen”, he said.

In the 80’s, Montealto formed bands that played in Cebu City and at one point, performed as back up singer for Philippine rock music icon, Mike Hanopol.

Aside from rock, jazz and pop music are also Montealto’s top music choices.

“There were a number of bands that I formed in Cebu with some peers from other provinces, but it got disbanded over time because I worked in Manila. I also formed groups in Manila but it was also dissolved because of my work,” he said.

From being a mechanical engineer, Montealto entered the military service at the age of 32, still because of music.

“Music also encouraged me to enter the military because someone told me that we can form bands among our troops. In every unit that I’m assigned to, I always form a group of music lovers,” said Montealto.

“When we had medical missions in the communities where we were assigned to, we also played music for the children. That was our way to win the hearts of the people so that they will not feel tensed with our presence,” he added.

After 25 years of military service, Montealto retired from the Philippine Army in 2016. His last assignment was with the Special Forces Regiment Airborne unit.

The former military man and Davaoeño was appointed by President Rodrigo Duterte to his next government position.

Soon after his retirement from the military, Montealto became regional director of LTFRB-9 based in Zamboanga Peninsula.

Last August 13, Montealto was assigned to assume the post of LTFRB-7 Director Ahmed Cuizon who has been moved to LTFRB-3 in Central Luzon.

Upon his return to Cebu, Montealto planned to pick up where he had left off by forming another band here.

“I haven’t scouted for talents here yet but I’m also planning to form a music group among the employees,” said Montealto.

Just like when he was in the military, Montealto said he planned to bring the music of LTFRB-7 to the communities.

“Perhaps during outreach activities. This is important especially when we start with enforcing so that they will see that we are not just rigid in apprehension; but we also have a mellow side and to exercise good relationships with our stakeholders,” he said.

Since musical instruments were quite expensive, Montealto said that he would start with acoustic music “since it is easier to find guitars and guitar-playing people,” he said.

During the turnover ceremony at the LTFRB regional office, the new director admitted that he had much to learn from Cuizon since his previous field of work was completely different from that of his duties in the transport board.

Montealto planned to continue with the policies initiated by Cuizon, whom he looks up to as his mentor.