Clash of the egos 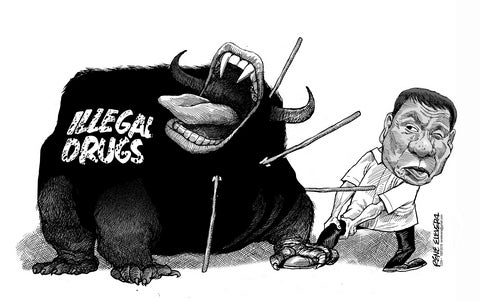 President Rodrigo Duterte waxes comical each time he critiques an opponent for a perceived character flaw.

He did this earlier this year when he slammed the activist Sister Patricia Fox for being, according to him, a foul-mouthed woman.

Audiences who have not been desensitized by the profanities regularly uttered by the President could only shake their heads and snicker in frustrated amusement.

Between Duterte and Fox, it is not hard to tell whose mouth needs soaping, scouring, and rinsing.

On Thursday, the Chief Executive blasted Cebu City Mayor Tomas Osmeña for hubris, exemplified, according to Duterte, in the mayor’s assertion that national officials should keep their hands off Cebu’s own response to the narcotics scourge.

“He speaks as if he is somebody. ‘Do not meddle with Cebu because we can take care of it.’ Who are you to say that,” the President asked, “as if you own Cebu? By what right? Just because you were the former president’s grandson?”

Seriously, this is the smog criticizing the darkness of the soot.

If he wants to moderate Mayor Osmeña’s hubris, Duterte ought to set an example by behaving as the steward that he is, not the owner of power and of his office.

If to be protective of one’s constituency is an act of hubris, how much more is the President’s declaration that persons with substance abuse problems have lost their humanity, or his pronouncement about who should die and who should live, or his asinine game of poor theology, or his threat to clobber Osmeña at their next meeting?

(Come to think of it, Duterte, chief promoter of federalism that he is, protests too much against the mayor’s zeal for turf. Does not emphasis on autonomy fall squarely within federalism’s spirit of devolution?)

Whether Osmeña accused Duterte of mollycoddling drug lords is not an issue as much as lingering questions over the persistent inflow of shabu from abroad in the third year of the Duterte administration, the continuing failure of the police to nab alleged drug lord and Duterte fellow wedding sponsor Peter Lim, and lingering questions over the role — if any — of the President’s own son in the drug trade in Davao.

Read Next
Selfie or groupie