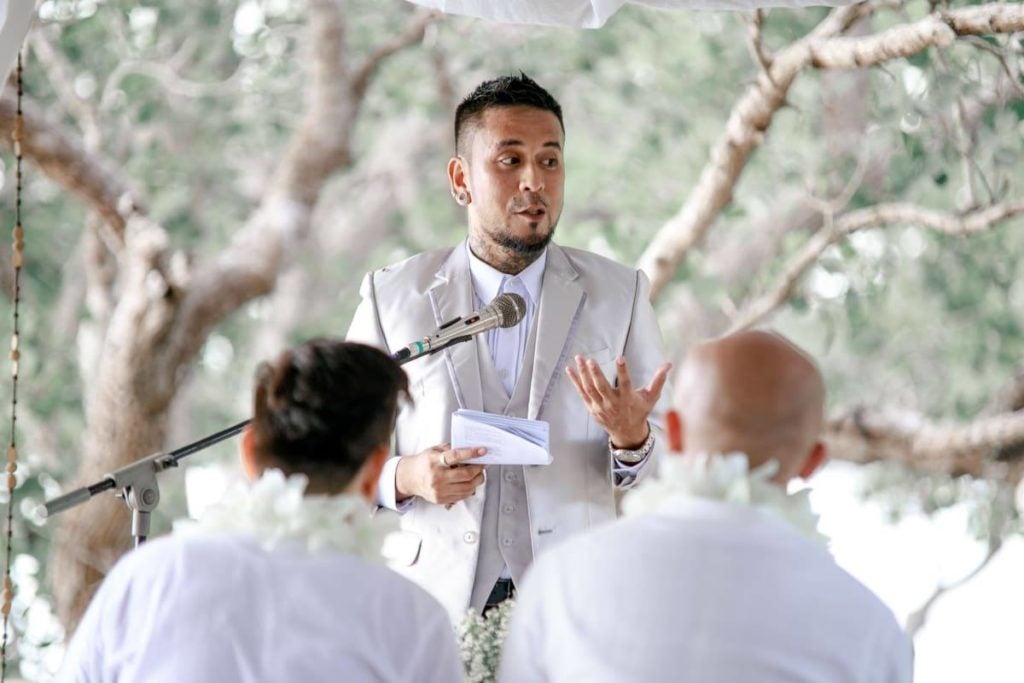 Treating themselves as a married couple, Michael Cano and Jay Lugo live together at a rented apartment in one of Cebu City’s upland residential areas.

After their symbolic wedding last June 18, they have changed their surnames on their Facebook accounts to Cano-Lugo as a way to publicly declare that they now take each other as spouses.

The couple shares their humble abode with three stray cats, Lily, Moe and Toothless whom they had adopted after the felines took shelter in their home.

While Jay takes charge of cooking meals and taking good care of their cats, Michael ensures that their studio-type apartment is spic and span.

At the crack of dawn, Jay gets up to heat water for Michael’s bath.

It is a habit that Jay has mastered to help his partner who goes to work as a customer service representative early in the morning.

Now that they have officially declared themselves as married following their symbolic wedding last June, they believe their relationship has strengthened.

“We have been receiving good, positive feedback from people, we feel closer to each other,” said Michael.

While the Philippines does not recognize same-sex unions, across the globe, 26 countries — mostly in Europe — officially recognize these marriages in their jurisdictions.

In Mexico, a largely Catholic country, same-sex marriage is also allowed in some areas.

According to the research, The Netherlands was the first country to legitimize same-sex marriages in 2000, while Australia was the latest to follow the emerging norm after its parliament passed a legislation allowing same-sex couples to wed in December 2017.

While there has yet been no Asian country to craft legislation allowing same-sex unions, Taiwan’s constitutional court struck down their legal definition of marriage in May 2017. 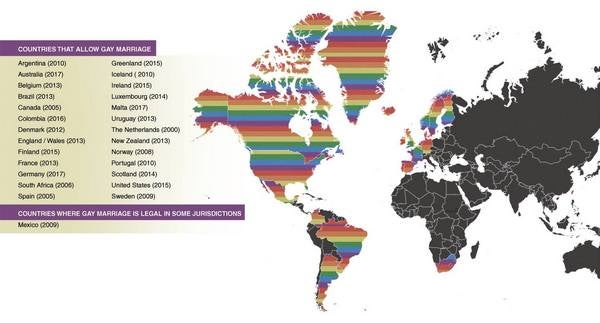 Taiwan’s court ruled that the definition of marriage limiting it to a union between a man and a woman was unconstitutional.

In the Philippines, the absence of same-sex marriage legislation and the lack of recognition did not stop some gender advocates from pushing for its legalization.

One of the earliest accounts of same-sex marriage ceremonies in the country was the 2005 union between Andres and Jose, deemed as the first New People’s Army (NPA) same-sex married couple.

Their NPA marriage was celebrated in Southern Mindanao.

In May 2015, lawyer Jesus Nicardo M. Falcis III filed a petition before the Supreme Court to allow same-sex unions by amending the country’s Family Code.

In August of the same year, two same-sex couples applied for marriage licenses before the Civil Registry Office in Manila, in an attempt to challenge the current family law that allows marriage only between a man and a woman.

In October 2017, former House Speaker Pantaleon Alvarez, together with 9 other representatives including Gwendolyn Garcia of Cebu’s third district, formally filed House Bill No. 6595 or the Civil Partnership Bill.

The proposed law, seeking to allow civil partnerships among LGBTQI couples in the Philippines, was the subject of deliberation before the House Committee on Women and Gender Equality last May 2018.

Over at the Supreme Court, the issue on same-sex marriages was also tackled in oral arguments before the High Court on June 19.

Recently, just ten days after Michael and Jay symbolically tied the knot in a wedding ceremony in Balamban, Cebu — the first same-sex marriage in Caraga Region involving a woman and a lesbian was also held in Bayugan City, Agusan del Sur last June 28.

For Michael, his marriage to Jay was meant to set an example to other same-sex couples that it was okay for them to express their love and commitment through an official wedding ceremony.

He said that he also wanted to create a ‘ripple effect’ among members of the LGBTQI community even though his union with Jay is not recognized in the country.

Michael hoped that the day would come when their symbolic union, which was officiated by a close friend, would be recognized by the government so that they can have the same rights as heterosexual married couples.

“I think it’s about time for government to recognize same-sex marriage so that we will be accorded our rights like insurance for example. What is going to happen if something bad happens to one of us? I don’t want that to happen,” Michael explained in Cebuano.

For her part, Magdalena Robinson, officer-in-charge of the Cebu City Anti-Discrimination Commission, said that same-sex marriages in the country while only symbolic, show the couple’s commitment to a long-term relationship and the willingness to share their domestic, economic and social lives
together.

“It is necessary for the State to intervene and protect the interest of both parties. Michael and Jay’s wedding should serve as basis for the proposal of a marriage equality measure,” said Robinson. (To be continued)

Read Next
THE ‘MOM’ EFFECT