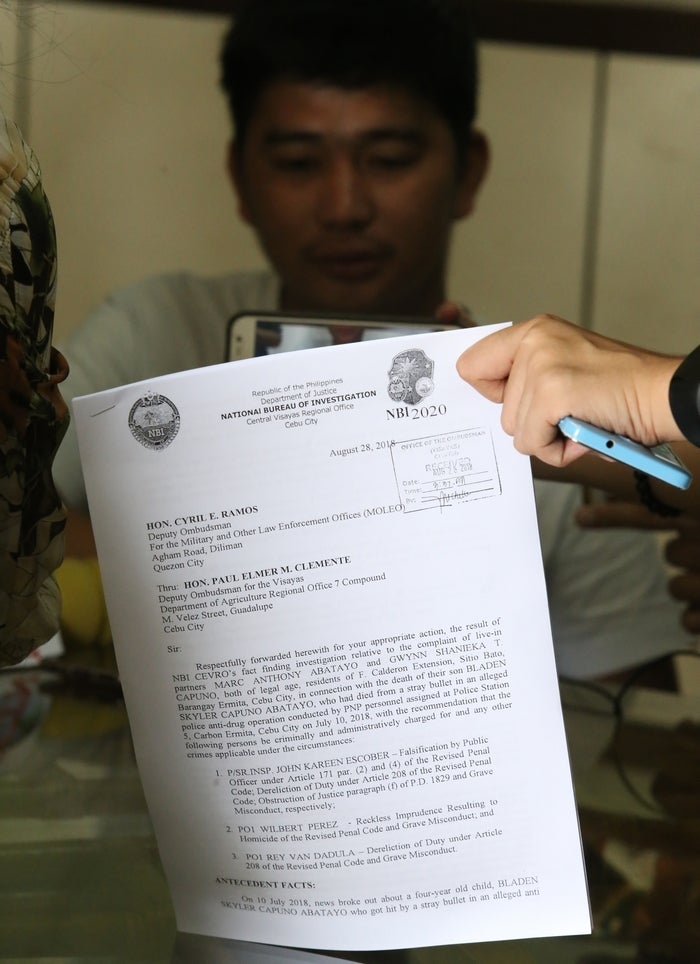 NBI-7 files a complaint against three policemen from the Carbon Police Station over the death of Bladen Skyler Abatayo
before the Ombudsman.

Despite their grief, Marc Anthony Abatayo managed to smile as he arrived at the

The 27-year-old father said he finally felt relieved after the NBI-7 filed criminal and administrative charges against three police officers of the Carbon
Police Station for the death of his four-year-old son, Bladen Skyler Abatayo.

Bladen Skyler was the preschool pupil who was hit by a stray bullet during an alleged anti-drug operation conducted by the police at a dilapidated house beside their home in Sitio Bato, Barangay Ermita.

In a 9-page complaint letter submitted before the Office of the Ombudsman on August 28, the NBI-7 moved for the filing of charges against Carbon Police Station chief, Senior Insp. John Kareen Escober, for falsification by public officer, dereliction of duty, obstruction of justice and grave misconduct.

Also charged were PO1 Wilbert Perez for reckless imprudence resulting to homicide and PO1 Rey Van Dadula for dereliction of duty.
Marc Anthony received a copy of the complaint on Monday, September 3.

“I am very thankful to the NBI for finally filing the case against them (police). The wheels of justice have finally started to grind,” Marc Anthony said in Cebuano after receiving a copy of the complaint.

However, PO3 Raydale Sardual and PO2 Dennis Steve Estrada, who were first reported to be part of the supposed botched anti-drug operation, were not included in the case.

In previous public statements, Escober said Perez, Dadula, Sardual and Estrada were responding to a tip that four persons were having a pot session at the second floor of the dilapidated house past 1 p.m. of July 10.

Escober also said that one of the responding policemen allegedly grappled with a suspect who was about to point his gun at them and that the
bullet that killed the child was from the gun of the suspects.

However, evidence gathered by the NBI-7 agents, which include witnesses’ accounts and CCTV footage and results of the calculated reconstruction conducted by the NBI forensic team, refuted the police’ version.

“During the conduct of the investigation, piecing together the various witness accounts, CCTV footage, and crime scene reconstruction, a contrary narrative of the shooting incident emerged. It was established that the police had made up a cover up story to conceal the truth of what really transpired that fateful day,” the complaint read.

According to the scene reconstruction report, the bullet that hit Bladen Skyler was from below going upwards.

“The measurements conducted on the bullet entry, bullet exit and the shooter’s line of sight coincided with the relative position of PO1 Wilbert Perez as he slipped going down the dilapidated wooden steps of the stairs of the abandoned house as he accidentally fired his gun as he was falling to the ground,” the report further read.

The investigation reports of NBI-7 also found that Salduar and Estrada only came in the picture after the incident hence, they were not included in the
filing of the case.

Meanwhile, the Police Regional Office in Central Visayas (PRO-7) said that they will provide legal support for the police officers charged.

“We welcome that development and all we can do is to support our people, to our police, considering that the case is already in the Ombudsman,” PRO-7 spokesperson Supt. Reyman Tolentin said.

Tolentin added that they will stand by the first statements issued by the police.

(Our regional director said that we will provide them with whatever assistance they will need.)

Tolentin also assured that the case will not affect the relationship between the Philippine National Police (PNP) and the NBI.

“They are simply doing their job,” Tolentin said.

Marc Anthony however said they still fear for their safety considering that the persons involved in his son’s case are policemen.
“We just keep on praying. All that we ask is justice for my son,” Marc Anthony said.

Marc Anthony, his wife and their two-year-old daughter have fled their home in Sitio Bato since Bladen Skyler’s burial on July 21 for their safety and the healing of their grief.

“If we stay there, we will be reminded everyday that our son died there. The pain will just continue to haunt us,” he added. /With USJ-R Journalism Intern Delta Dyrecka C. Letigio

Read Next
Eight Talisay cops under probe for evidence theft