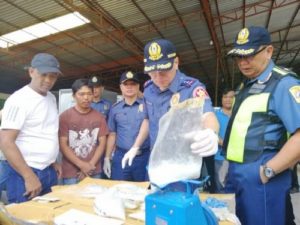 Police said in a report that two unnamed men were working on a drainage project in front of Dancs Refrigerator Repair Service when they discovered 10 packs of suspected illegal drugs buried underground.

Danilo Sibug, owner of the building, reported the find to the police when he was alerted by the workers, authorities said.

The Quezon City Police has already launched an investigation on the recovered illegal drugs.