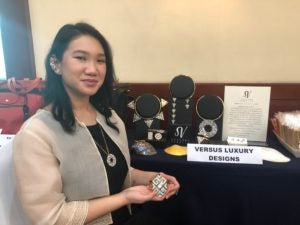 Susanne Verallo has set up her own jewelry business, a brand under her own name, which has gained recognition in the international market.
CDN PHOTO/JOSE SANTINO S. BUNACHITA

Who knows the shells from restaurants that are usually just thrown away can be turned into not just fashionable, but luxurious jewelry?

Susanne Verallo, 30, does this with her namesake brand which mainly caters to international buyers and jewelry enthusiasts who are more appreciative of the meticulous process and details in creating such pieces.

“Everybody knows about shell inlays in Cebu. But nobody appreciates that the craft is so intensive. It is a Cebuano craft. And I wanted to make it high end,” she shared.
Verallo started her line of jewelries, which include cuffs, earrings, necklaces, and rings in 2015, a few years after she graduated from college.

It was in 2009 when Verallo graduated from the University of San Carlos with a degree in interior design. She then pursued further studies at the Dumos Academy in Milan, Italy and got her degree in product design after a year.

Prior to establishing her own brand, Verallo worked with a mentor, another designer, who found out about her passion for doing fashion accessories.
She also did some major projects with her mentor, including designing the furniture used during the thanksgiving mass for the sainthood of San Pedro Calungsod in Cebu last November 2012.

Eventually, her mentor retired and Verallo decided to continue her career.

After establishing her brand, Verallo tried her hand in making bags and released her first collection in 2016.

However, it did not do well so she had to rethink her own niche.

“Then I decide to go to jewelry. There were wastes from shell used in my clutch bags. There are also companies doing shell craft in Cebu so I though I can make use of their scraps,” she said, recalling that they even bought shells from sutukil (sugba, tuwa, kilaw) restaurants in Mactan Island.

With a starting capital of P30,000, Verallo bought some machinery and raw materials. She also used part of the money for salaries of her workers who are mostly outsourced.

Verallo has one main partner artisan who has helped her hone her skills in the craft of shell inlays.

Int’l market
While she tried her luck in the local market in both Cebu and Manila, Verallo has found her niche market in the international arena.

Verallo recalled joining several trade shows in Manila, but it did not work out.

With sheer determination and an internet connection, Verallo was able to network with stockists and boutiques in cities like New York, Los Angeles, London, and Zurich.

She said she just e-mailed these stockists and waited for those who replied to her pitches to export and display her products abroad.

“Filipinos are quick to see mistakes on the pieces. But you can’t make it perfectly. These are natural materials and are man-made. When I talk with foreigners, they appreciate this and they understand that there may be slight differences,” she said.

Different path
Back in 2005, Verallo was all set to pursue studies in the field of medicine.

Her parents, who are in the medical field, egged her to take up nursing which was in boom during those years.

She already passed the entrance exam in Velez College. But she realized she did not want to do it and that she wanted to do something more on the creative side.

This was when they inquired at the University of San Carlos and enrolled in the interior design course. In her second year in college, she found a deeper love for furniture making which she also pursued for a time after graduating.

Learning process
Verallo admitted that she used to focus so much on the creative side of her business.

“I had zero business acumen. I couldn’t do things like break even analysis, taxation. It was very foreign to me. When my friends asked me how my business is doing, I just say it’s okay, it’s still there,” she said.

This prompted her to enroll in the Kapatid Mentor Me Program of the Department of Trade and Industry (DTI) – Cebu Province.

She was among the graduates of the fourth and most recent batch last August.

“Now that I know the status of the business financially. I can pinpoint where we can go. I want to keep tapping the international market and improve my branding,” she said.