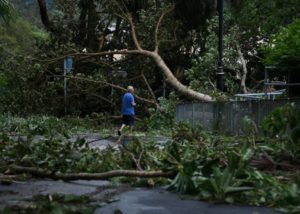 The monumental task of cleaning up Hong Kong has begun.
/AFP

Hong Kong began a massive cleanup Monday after Typhoon Mangkhut raked the city, shredding trees and bringing damaging floods, in a trail of destruction that left dozens dead in the Philippines and millions evacuated in southern China.

The death toll in the Philippines, where the main island of Luzon was mauled with fierce winds and rain, rose to 65 overnight as rescuers pulled more bodies from a huge landslide in the mountain town of Itogon.

The landslide buried an emergency shelter which was being used by miners and their families in the town.

After tearing through Luzon and pummelling Hong Kong and Macau, the storm made landfall in mainland China late Sunday, killing four in Guangdong province, including three hit by falling trees.

Authorities there said they had evacuated more than three million people and ordered tens of thousands of fishing boats back to port before the arrival of what Chinese media had dubbed the “King of Storms.”

In the high-rise city of Hong Kong, the government described the damage as “severe and extensive” with more than 300 people injured in Mangkhut, which triggered the maximum “T10” typhoon alert.

Read Next
Researchers turn to oysters as pollution-tracking sentinels