THE CANDIDATES: Ginatilan and Consolacion 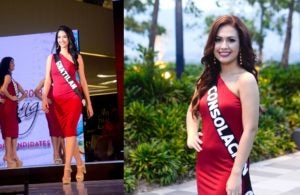 ALTHOUGH there are ladies younger than her in Binibining Cebu 2018, Sharon Angel is not conscious about her age.
She sees her past experiences in pageants as an advantage.

Aside from the people of Ginatilan, Angel also dedicates her Binibining Cebu 2018 journey to her grandmother who passed away this year and who had been very supportive of her career.

Located 135 kilometers southwest of Cebu, Ginatilan got its name from the Spaniards who had difficulty pronouncing its original name “Hinatdan” consequently changing it to Ginatilan.

The town is known to be the home of Saint Pedro Calungsod, the second Filipino saint recognized by the Catholic Church.

There is also a Saint Gregory Church constructed in 1829 which flaunts a Baroque style of architecture.

“I would promote Ginatilan not just focusing on the tourist spots that we have but through its people. We are the home of the second Filipino saint who inspired a lot of devotees not just in our municipality but also in the entire province. The values that St. Pedro Calungsod has instilled in us is something that tourist should discover and that is kindness and selflessness,” she said.

JASMIER Murray was at first hesitant to join Binibining Cebu 2018 but was able to overcome her nervousness and trust herself.
Murray represents Consolacion, known for the Sarok Festival, which is celebrated every February 14.

Sarok, a hat made of bamboo strips and banana leaves, is a product locally made by the Consolacionanons particularly those living in mountainous barangays like Tolotolo.

The town is also the home of the upcoming international port in Cebu, specifically located in barangay Tayud.

“Consolacion is the gateway to the northern part of Cebu, along with its quiet setting. Consolacion is one of the most progressive municipalities in Cebu,” Murray said.