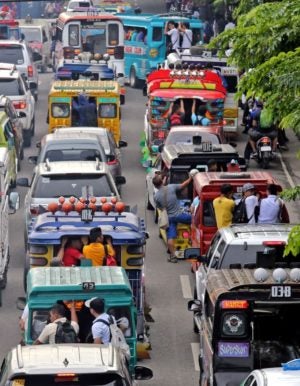 For more than two decades since the ‘90s, the streets of Metro Cebu have been his second home.

On most days, Abad manages to bring home at least P500, after rigorously plying the route between Cebu City’s Barangay Labangon in the south district and the North Reclamation Area (NRA), some seven kilometers away.

The amount is barely enough to buy food for his family and provide for all their other needs; while circumstances on the road have become increasingly difficult.

He said traffic in Cebu has gone from bad to worse.

“Sige lang ta og traffic. Kapoy na kaayo (Traffic has become a usual thing. I am so tired of it),” he added.

Metro Cebu’s worsening traffic situation is not just a major concern for jeepney drivers like Abad.

The effects of road congestion are now imbedded in Cebuanos’ day-to-day life that it has become quite difficult to untangle from the current mess.

As of the first quarter of 2018, the Japan International Cooperation Agency (Jica) pegged Metro Cebu’s losses in economic opportunities due to traffic at P1.1 billion a day.

The amount is around one-third of the losses due to traffic in Manila which Jica pegged at P3.5 billion a day last February.

It was Jica which said in a 2015 study that the capacity of existing roads in the metropolis would not be suitable for its traffic demand in 2050.

Records of the Land Transportation Office in Central Visayas (LTO-7) showed that there are now about 800,000 public and private vehicles plying the streets of Cebu and other areas in the region.

“We can’t do anything about the volume. The only recourse now is to manage the existing road arteries,” said LTO-7 Regional Director Victor Caindec in an interview.

Caindec admitted that the massive pileup of vehicles in the streets of Metro Cebu has become very alarming.

“At present, there are no high-capacity, high-speed transport modalities in Cebu. Also, we do not have forward-looking infrastructures that could progressively address the transport system,” he explained.

Caindec called on local government units to unite and find ways to address the problem before it goes totally out of hand.

“What needs to be done is for the local government units to harmonize their directions. Cebu needs to get its acts together,” said Caindec.

What needs to be done is for the local government units to harmonize their directions. Cebu needs to get its acts together.

Except for Cebu City Mayor Tomas Osmeña, all the local chief executives of cities and towns in Metro Cebu support plans for a unified traffic approach by having synchronized traffic laws as a way to address the worsening traffic congestion.

Osmeña withdrew Cebu City’s participation in the Metro Cebu Development Coordinating Board (MCDCB) in 2016 and refused to participate in a traffic summit organized by the Cebu provincial government this year.

During the summit, the mayor also did not send any representatives to speak on behalf of Cebu City, the largest highly urbanized city among all the cities composing Metro Cebu, which are the cities of Danao, Lapu-Lapu, Talisay, Mandaue, Naga, and Carcar.

“It’s a waste of time. I’m just making it clear — I don’t go under them (Metro Cebu Development Coordinating Board). They cannot claim to be Mega Cebu without Cebu City,” Osmeña said.

The conspicuous absence of Cebu City in the summit put plans for a unified traffic scheme at a quandary.

Instead, Osmeña continues to push for the implementation of the P17-billion Cebu Bus Rapid Transit (BRT) as Cebu City’s way of solving traffic.

The BRT project is among four “basket of solutions” lined up by the Department of Transportation (DOTr) to address traffic congestion in the metropolis.

The others are the Light Rail Transit (LRT), the point-to-point (P2P) bus system, and a monorail project — all under what is called as the Integrated Intermodal Transport System (IITS).

In identifying areas for IITS, transport officials considered Metro Cebu’s road profile and the fast-growing need for an efficient mass transport system in bigger and inter-connected cities, such as Cebu, Mandaue, Lapu-Lapu and Talisay, as well as neighboring municipalities.

The DOTr plans to have a monorail system in Lapu-Lapu City which will connect Mactan- Cebu International Airport (MCIA) to the different hotels and resorts on the island.

The LRT system, another major component of the IITS, is going to traverse Carcar City in southern Cebu to Danao City in the north.

A Singaporean-Chinese and Filipino consortium has submitted a $3 billion proposal to construct the LRT system which will include a subway in Cebu City and an airport line from Mandaue City to the MCIA in Lapu-Lapu City.

According to Transportation Secretary Arthur Tugade, the IITS could achieve “partial operability” within one and a half to two years.

In the meantime, LTO’s Caindec said local government units must review their routes to maximize the use of the roads to lessen vehicular congestion.

“The government must now seriously consider high-capacity transport public modalities in Cebu — whether bus or train system,” he said.

Caindec blamed the lack of vision of many government leaders in the past for today’s traffic mess.

“We have experts (in the past) telling us what we should do and we did not follow it. If you ask me, it’s a failure of governance,” said Caindec. (To be continued)

Read Next
Volunteers: Making life a bit easier for victims