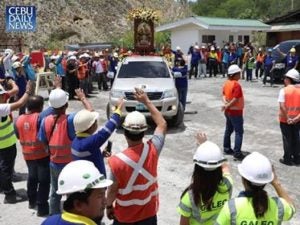 Employees of the Carmen Copper Corporation (CCC) in Barangay Don Andres Soriano, Toledo City took a break from their usual routine to welcome the visiting image of the Sto. Niño de Cebu on Wednesday (September 26).

They went out of their offices and work stations before noontime to wave their hands or flaglets which they carried to honor Sto. Nino de Cebu.

Sofia Picardal,  CCC Senior Corporate Communications Officer, said that this was the first time that the holy image was brought to the mine site, which is the source of livelihood of more than 2,000 residents of Toledo City.

The visit is one of the highlights of this year’s celebration of the 14th year of incorporation of CCC.

The corporation is an affiliate of the Atlas Consolidated Mining and Development Corp.

The image which visited the CCC compound is the same image that is used in the annual fluvial procession held ahead of the Sto. Niño’s annual feast.

It arrived at the CCC staff clubhouse at 10:30 am and was welcomed by CCC officials and employees and Fr. Rolando Manayon, rector of the Our Lady of Mt. Carmel parish.

At 11 a.m, the holy image went on a brief mine tour which lasted for an hour and a half.

The image was then brought to CCC’s recreation center for a two-hour vigil, which the management opened to their neighboring communities.

A Mass is scheduled at 3p.m. before the image will head back to the basilica at 5p.m. on Wednesday.