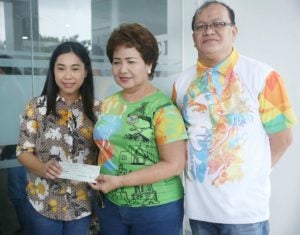 At least P2.5 million financial aid was handed over to the city government of Naga for the landslide victims on Thursday morning (September 27).

Mayor Elanito Peña of Minglanilla town also handed a P500,000 check to Chiong along with relief goods that were sent by the Minglanilla Chamber of Commerce and Industry.

While quarrying is also an industry in Minglanilla, Peña said he already ordered the suspension of all quarry operations in four barangays pending the assessment of the Department of Environment and Natural Resources in Central Visayas (DENR-7).

Peña added that he will be willing to completely forego with the mining operations if the DENR-7 finds that the quarry imposes danger to the residents in the neighboring community.

Peña said that he is also waiting for the confirmation of the DENR that one of the quarry sites lie in a fault line.

Read Next
Davide: Suspension of quarry operations only for 20 days