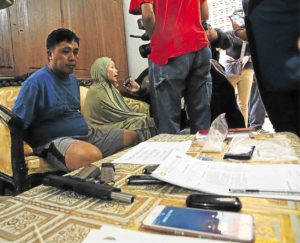 QUEEN RAIDED Johaira Macabuat and her husband, Suharto, being questioned by PDEA agents during a raid on their house in 2016. JIGGER JERUSALEM. /Inquirer photo

CAGAYAN DE ORO CITY—President Duterte’s bloody campaign against drugs suffered one of its worst setbacks after a court dismissed drug and gun charges against a woman tagged as one of Mindanao’s biggest drug lords because of what the court said was planted evidence.

The head of the Central Mindanao office of the Philippine Drug Enforcement Agency (PDEA) condemned the dismissal of the cases against Johaira Macabuat, alias Marimar, who had been described by the PDEA as one of the country’s biggest drug suppliers operating in Mindanao.

The decision was issued last Friday and released to media only this week.

In his order, Acebido gave credence to testimony that agents of the regional PDEA office planted evidence against the suspects during a raid on the Macabuats’ residence in the village of Kauswagan here on July 23, 2016, just weeks after the bloody war on drugs was launched by Mr. Duterte.

Wilkins Villanueva, head of the PDEA regional office, questioned the dismissal of the cases against what he said was the “drug queen of the South.”

Following the decision, the Bureau of Jail Management and Penology released from prison Suharto and the eight other coaccused.

According to the PDEA, Macabuat allegedly led a group that supplied drugs to the regions of Central Mindanao, Davao, Soccsksargen, Caraga, Autonomous Region in Muslim Mindanao and Metro Manila.

Macabuat was former mayor of Maguing town in Lanao del Sur, while her husband was a major in the Philippine Army.

Villanueva said it was “unfortunate” that Judge Acebido “swallowed the testimonies of the defense hook, line and sinker” and disregarded evidence presented by the prosecution.

In his 25-page decision, Acebido said the legality of the search made on the Macabuats’ residence “is not gauged by its yield but also by the manner in which it was conducted.”

“The prosecution likewise failed to prove possession of the accused of the items listed in the information in all these cases at the time of the arrest,” it read.

Also, the decision said, PDEA agents carried out the raid prior to the arrival of village officials and media representatives as required by protocol.

The decision also questioned the seizure of supposed drugs in the Macabuats’ residence.

“Part of the controversy in these cases is not only centered on the illegality of the implementation of search warrants but also on the claim of the accused that the dangerous drugs and paraphernalia allegedly seized were planted,” the decision read.

Villanueva said the judge’s decision has put the regional PDEA offices’ reputation on the line.

He said he could not accept Acebido’s ruling.

“We will assail the decision and bring it to the Supreme Court,” he said.

“We will not rest until justice is served,” he added.

“This is a reminder to our law enforcers that even if they are already armed with a search warrant, they still have to comply with rules in implementing it,” Uy said.