Brace for more rains in the next few days 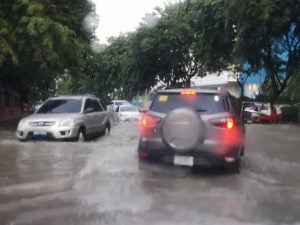 AFTER yesterday’s heavy downpour which resulted in floods in different parts of Metro Cebu, the state weather bureau said Cebu will experience isolated rain showers in the next few days.

Although Cebu was spared with a direct hit of typhoon Queenie, which entered the Philippine Area of Responsibility (PAR) on Monday, there will be rain showers brought about by localized thunderstorms.

Weather Specialist Van Singson of the Philippine Atmospheric, Geophysical and Astronomical Services Administration (PAGASA) Mactan also said that the trough or extension of the tyhoon could possibly affect Central Visayas and will bring scattered rains.

Queenie, with an international name “Kong-rey”, has maximum sustained winds of 160 kilometers per hour (KPH) and gustiness of about 195 kph and is moving in a northwest direction.

Singson said the typhoon would less likely make a landfall as it moves towards extreme northern Luzon.

As of 4 p.m. Monday, the weather disturbance was spotted last about 1,170 km east northeast of Borongan City, Eastern Samar.

Meanwhile, some parts of cities in Cebu and Mandaue experienced flooding yesterday because of moderate to heavy rains and thunderstorms from around 10 a.m. to 4 p.m.

This prompted the Mandaue City government to deploy buses and emergency vehicles to ferry passengers who were stranded on the city’s flooded streets between 3 p.m. to 5 p.m.