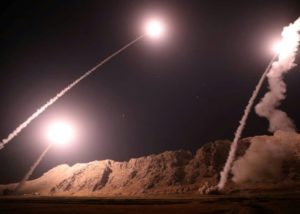 IRAN’s Revolutionary Guards said Monday they had launched a missile attack against a “terrorist” headquarters in Syria in retaliation for a September attack on the Iranian city of Ahvaz.

“The headquarters of those responsible for the terrorist crime in Ahvaz was attacked a few minutes ago east of the Euphrates by several ballistic missiles fired by the aerospace branch of the Guardians of the Revolution,” the Guards said on their official website.

“Based on preliminary reports, many takfiri terrorists and the leaders responsible for the terrorist crime in Ahvaz have been killed or wounded in this missile attack,” the Guards added.

The term “takfiri”, derived from the Arabic word for anathema, is used by the Iranian authorities to refer to Sunni jihadists.

The Guards did not say where the missiles were launched from.

According to Iran’s Fars news agency, the Guards fired Zolfaghar and Qiam missiles, with a range of 750 kilometers and 800 kilometers, respectively.

On September 22, 24 people were shot dead in an attack at a military parade in Ahvaz in southwest Iran. The Islamic State group, which Iran and its Damascus allies are fighting in Syria, has claimed responsibility for the attack.