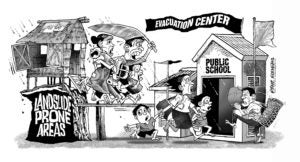 Though it would be quite unpopular with the masses especially those displaced by natural and human inflicted calamities, the position taken by Education Secretary Leonor Briones that schools should not be used as evacuation centers anymore bears watching and consideration.

Though families displaced by the Sept. 20 landslide in the City of Naga were evenly distributed across public structures like gymnasiums and barangay halls, a considerable number were also placed in schools at least until they are provided relocation.

In emphasizing her point, Briones said President Rodrigo Duterte declared that no school should be used as an evacuation center unless there is no other viable structure that can house the displaced victims.

Which is sadly lacking in most parts of the country even after it had experienced more than its fair share of super typhoons and natural calamities, the latest being super typhoon Ompong (international name: Mangkhut) which caused the landslide in Itogon town, Benguet province and the Sept. 20 landslide in the City of Naga.

The Cebu provincial government once lobbied for local governments to build their own multipurpose centers that were intended to house calamity victims in order to complement their local and province-wide disaster management program.

Anyone who’s come across stories of fire outbreaks, natural calamities and other emergencies knows the scenario all too well: the victims were either relocated to a covered court, barangay compound, multipurpose gym or a school where they are provided meals, beddings, essentials and given free access to toilets which they usually don’t bother cleaning up afterward.

Local school officials then have the unpleasant task of negotiating with barangay and local officials in setting the date for the immediate relocation of the families, who use school facilities with nary a thought about taking care of them since they assume that the local government will take care of it for them.

The schoolchildren are then made to attend classes under tents or trees for the duration of the stay of the victims who will then leave school with all sorts of garbage and broken items behind.

Again, this DepEd policy will prove unpopular to some local officials who have displaced constituents to take care of but such needless situations can be avoided if they set aside funds to build, operate and maintain emergency centers for this purpose.

It’s high time that school children be spared the inconvenience of being displaced from their schools in favor of victims who have no place to go but should not be neglected by their government.