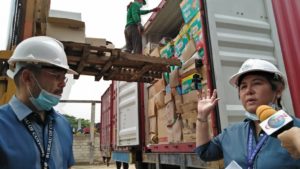 October 3, 2018: Elvira Cruz, district collector of the Bureau of Customs in Central Visayas (BOC-7), explains to media on why the relief goods will be disposed as the shipments of the four container vans were abandoned.
(CDN photo/ Jessa Mae Sotto)

Donations that were supposedly intended for victims of Supertyphoon Yolanda which badly affected northern Cebu towns in October 2013 were destroyed through thermal burning on Wednesday morning.

Cruz said that donations coming from Belgium, London and Norway were already unsafe for use after these reached its expiry dates.

The donations arrived at the Cebu International Port (CIP) on January 2014 yet but were never distributed to its intended beneficiaries because of the donor’s failure to apply for tax exemption.

Cruz said that while the donors were unable to secure tax exemption from the Department of Finance (DOF), the three consignees – ABS-CBN Foundation, DSV Air and Sea, and Wellmade Motors and Devt. Corp. – also failed to pay customs charges, storage fees and demurrage to facilitate its release.

“This (the shipment) was meant to be donated for the Yolanda victims (in Cebu). However, hindi siya na process because the donor does not want to pay taxes and at the same time wala siyang permit, wala siyang exemption,” Cruz said.

Cruz also said the donors also failed to show their packing list to determine the total monetary value of the undeclared items.

Wanting to save the donations, Cruz said they tried to approach the Department of Social Welfare and Development in Central Visayas (DSWD-7) to convince them to receive the donation and put these to use.

However, Cruz said the national agency refused since most of the donated items have already reached its expiration dates.

“They refused to get and then we decided na we just do the condemnation in order also to clear the (CIP) yard,” she said.

BOC issued a notice and declaration of abandonment of shipment on June 2017.

Cruz said she decided to already consider the goods as condemned because these have been abandoned in the last four years.

Three of the four container vans which contained the donations were brought to the RRDS Petro-Chemical Industries, Inc. in Barangay Paknaan, Mandaue City on Wednesday morning for thermal destruction.

The fourth container van remains at CIP and will also be brought to the RRDS compound on a separate date for destruction.

“It is such a waste. Sayang talaga,” said Cruz.