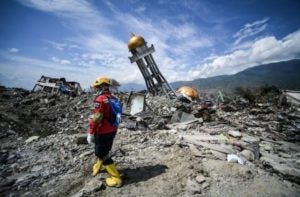 More than a thousand people may still be missing in the seaside city of Palu, eight days after the quake struck.
AFP photo

Rescuers picking through the grim aftermath of Indonesia’s quake-tsunami issued a fresh public health warning yesterday as more decaying corpses were unearthed from beneath the ruined city of Palu.

Officials said yesterday the death toll had climbed to 1,649 with more than a thousand maybe still missing in the seaside city on Sulawesi island, after the region was hit by a powerful quake and a wall of water.

Hopes of finding anyone alive a full eight days since the disaster have all but faded, though the search has not been officially called off.

There are fears that vast numbers of decomposing bodies could still be buried beneath Petobo and Balaroa — two areas virtually wiped off the map.

“Most of the bodies we have found are not intact, and that poses a danger for the rescuers. We have to be very careful to avoid contamination,” Yusuf Latif, a spokesman for Indonesia’s search and rescue effort, told AFP from Palu.

“We have vaccinated our teams, but we need to be extra cautious.”

Security minister Wiranto, who like many Indonesians goes by one name, said eventually the worst-hit areas would have to be declared mass graves and left untouched.

“We have to make a decision as to when the search for the dead will end. Then, we later must decide when the area will be designated a mass grave,” he told reporters late Friday.

At the massive Balaroa government housing complex, where the sheer force of the quake turned the earth temporarily to mush, soldiers wearing masks to ward off the stench of death clambered over the giant mounds of mud, brick and cement.

Read Next
About and against