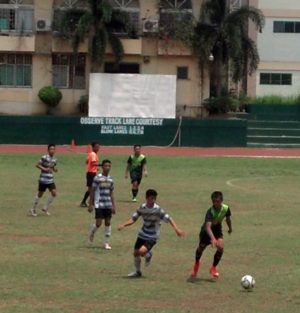 The Magis Eagles kept their record immaculate at 4-0-0 (win-loss-draw) and advanced into the next round as the top ranked team even if it will lose its last game against defending champions Don Bosco Technical College (DBTC) Greywolves next weekend.

Ateneo head coach Oliver Colina said he is now satisfied with how the team played.

“Yes, but hopefully they will show more because they are so hard working in their training. I always tell them not to be satisfied with what they have now. I always tell them to work harder,” said Colina, who added that he wants the team to win all of their games.

Mushashi Ayabe opened the rout for the Magis Eagles with a penalty kick in the 12th minute, followed by a goal from Leo Maquiling just five minutes later.

Maquiling added his second goal in the opening minutes of the second half while Earl John Patron sealed the Magis Eagles win with his goal in the 76th minute.

In the second game, the University of San Jose-Recoletos (USJ-R) Baby Jaguars climbed to the second spot with a 4-1 routing of the Sisters of Mary School (SMS) Boystown Aloysians.

The win handed the Baby Jaguars seven points off a 2-1-1 slate while the SMS Aloysians, first timers and a guest in this tournament, have two more chances left to score a win.

The SMS Aloysians actually found the back of the net first courtesy of Jervin Zurbito in the 18th minute.

However, Vincent Espinosa started the scoring spree for the Baby Jaguars with his goal in the 22nd minute.

This was followed by goals from Angelo Colina in the 37th, Dustin Drey Ramirez in the 53rd and Januar James Villarin in the 56th.

The Baby Jaguars could have scored more if not for Kenneth Ace Lomingkit, SMS goalkeeper, who kept working hard until the final whistle.

In the last game, DBTC stayed in contention with a 1-0 win over the University of San Carlos (USC) Baby Warriors. Charles Clarence Unabia, a most outstanding athlete of the Milo Little Olympics National Finals in 2014, gave the Greywolves their much needed win with his goal scored with just eight minutes left in the match.

The loss dropped the Baby Warriors to third place with a 2-2-0 slate while the Greywolves climbed to fourth place with a 1-1-1 card.

Both USPF and SMS are already out of contention.

In today’s collegiate games, defending champions USC Warriors will be gunning for their second straight win against current leader, University of the Visayas (UV) Green Booters.

Prior to their match-up, the University of Cebu (UC) Webmasters hope to score their first win at the expense of USPF Panthers, who are also looking for their first win in the tournament.

Read Next
READY FOR BATTLE