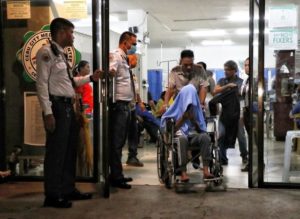 Malubog killing survivor Sharmaine Puran (covered in towel) is escorted by Commission on Human Rights in Central Visayas (CHR-7) chief investigator Leo Villarino as she is wheeled out of the Cebu City Medical Center to a waiting ERUF ambulance. Puran is then brought to the Archbishop’s Residence past 8 p.m. on Oct. 6, 2018.

Shunning a police offer to secure them, a survivor in the Malubog killing has found refuge in the House of God and given protection by the Cebu Archdiocese and the Commission on Human Rights in Central Visayas (CHR-7).

By 8 p.m. on Saturday, Sharmaine Puran, one of the two survivors of the alleged salvaging incident that left five persons dead, was escorted out of the Cebu City Medical Center (CCMC) by CHR-7 chief investigator Leo Villarino and brought by an Emergency Unit Rescue Foundation (ERUF) ambulance to the Archbishop’s Residence at D. Jakosalem St., Cebu City.

The church shelter provided to Puran, who was wheeled out of the hospital in a wheelchair with a towel covering her head, came hours after Villarino announced that CHR-7 has stepped into and would begin investigating the shooting incident that took place in Barangay Malubog, Cebu City, sometime around 3 a.m. on Thursday, October 4.

Both Puran and the other survivor, Antonio Belande, had claimed the policemen were responsible for the killings.

Villarino said that Puran and Belande, through their relatives, sought the help of their office.

“They were afraid for their lives after what happened to them. Their relatives contacted us. So, this is why we will be taking them under our custody,” said Villarino.

“We will place them under our custody once they are discharged from the hospital,” he added.

Villarino has refused to divulge where Belande and Puran would be sheltered for security purposes.

But at around 7:30 p.m. on Saturday, Puran came out of the hospital with personnel from CCMC escorting her into an ERUF ambulance that transported her to the Archbishop’s Residence.

Members of the media who followed the ambulance were, however, not allowed to enter the property.

Cebu Daily News tried but failed to reach Msgr. Joseph Tan, spokesperson of the Archdiocese of Cebu, through the phone on Saturday.

A text message sent to him was left unanswered as of 8 p.m. Fr. Andrei Ventanilla, one of the secretaries of Cebu Archbishop Jose Palma, did not pick up the calls as well.

Belande, on the other hand, will remain at CCMC as he still needed treatment for the gunshot wound he sustained while he was escaping from his captors.

Belande sustained a gunshot wound on the left side of his stomach fired by one of his captors.

Alaras told reporters that he was there to sign the documents that formalized the turnover of custody from the police to CHR-7.

He added that they respected the decision of the survivors to seek help and security from CHR-7.

“We received information that she (Puran) will be discharged so aside from signing documents, I am also here to ensure her safety once she gets outside the hospital,” said Alaras. 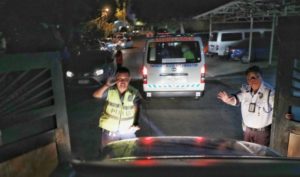 A policeman and a security guard bar the media from entering the Archbishop’s Residence where Malubog killing survivor Sharmaine Puran is brought on board an ambulance on Saturday night, Oct. 6, 2018.
CDN PHOTO/TONEE DESPOJO

The family of Belande, meanwhile, is mulling to place him under stress debriefing after what happened. Carlota Belande, Antonio’s wife, said her husband was still traumatized.

“It would be better that he will undergo stress debriefing. I observed that he is still traumatized by what happened,” she added.

She claimed Osmeña promised to help them in whatever way he can, and even provided financial aid.

However, Carlota begged off to disclose the amount.

“The offer of the mayor is a good sign, and I thank him for his generosity,” Carlota told CDN in an interview.

But Carlota said she was unable to meet and talk with Sinas.

“Me and our four children are still going to discuss what steps to take next,” she added.

Belande and Puran, in separate interviews, have told reporters that they and five others were brought to the mountain barangay of Malubog past 3 a.m. on Thursday on board a van.

Both said they hid behind the bushes surrounding the Transcentral Highway when they managed to escape their captors.

Belande, a habal-habal (motorcycle for hire) driver, claimed that he and another driver, Christopher Tangag, were just hired to bring passengers to Barangay Guadalupe, Cebu City, on Wednesday, October 3, when they were accosted allegedly by policemen.

Belande claimed that he and Tangag were picked up by six policemen, some of whom were in uniform, outside a mall and condominium at around 5 p.m.

They were later blindfolded with their hands tied with plastic handcuffs, and brought past midnight to the secluded area along the Transcentral Highway in Malubog.

He said that after he saw that the other captives were being shot, he managed to run away by rolling down the ravine.

He said shots were also fired at him but even if he got wounded, he was able to hide in the bushes.

He only emerged at around 6 a.m. when reporters and barangay officials arrived in the area.

Soon after, Puran also emerged from the bushes, saying she also managed to escape and was also able to hide.

Tangag, who was a call center agent working part time as a habal-habal driver, was among those found dead in the area.

The two survivors both claimed that they were brought to Barangay Malubog by policemen, and also refused to be accompanied by police to CCMC hours after the shooting.

Sinas, however, has denied their accusations, insisting the police had nothing to do with the incident.

He said their initial investigation indicated the crime might be the handiwork of a drug syndicate.

Yesterday, Sinas declined to comment on the decision of the two survivors to seek help from CHR-7.

“No comment,” Sinas said in a text message sent to CDN. However, he had earlier said that he would have no problem with Puran and Belande seeking help from other government agencies.

In a press conference last Friday, Sinas said he would not mind if the local government of Cebu City or CHR-7 would be the one to secure the two survivors.

“Walay problema sa amo. Kung ang city or CHR-7 mo-secure sa ilaha, that’s fine,” said Sinas. (We do not have a problem with that. If the city government or CHR will provide security for the two survivors, it’s fine.)

The Cebu City Police Office (CCPO), on the other hand, has yet to interview the survivors.

Senior Supt. Royina Garma, CCPO director, said the two survivors were not yet interviewed as their field investigators were still gathering evidence and doing background check on the survivors and the five men who were killed.

“Lisod mopagawas mi wala pa nahuman (It is difficult to issue statements on the case when the investigation is still ongoing).

As of now we can only divulge limited information,” said Garma.